1916 and 1917 marked the high point of the US Coin revolution that Theadore Roosevelt kicked off with his redesign of the Double Eagle Gold Dollar, which followed changes in all the gold coin currency, and then the Cent (Lincoln), Nickel (Buffalo), the Dime (Mercury), and finally the Walking Liberty Half and the Standing Liberty Quarter.

Of them all, the most contriversal for the public seemed to be the Quarter. For starters the coin seemingly had public nudity with a nipple showing by Lady Liberty. This nearly perfect specimen, a coin of my dreams, shows the possibly inappropriate cleavage that had all of the Victorian and Guilded Aged a stir.

Furthermore, to make everything more interesting, the coin wasn't just any Miss Liberty, but speculation as to who modeled for the coin which really drove the gossip circuits. Edwardian America in the early decades seemed sexualy repressed only with volcanic fits of Voyerism. Lead by artist models and film beauties, the American Queens of this period who could be speculated to have posed of this bare breasted coin could have include Evelyn Nesbit who brilliant architect Stanford White was shot dead in the face over, Audrey Munson, who was the model for the Mercury Dime which apeared at this period and who was familiar with the artist Hermon Atkins MacNeil who designed the coin, and who was also associated with a more complex situation involving a lover and a murder, the more prolific of all the models of this period to only die in a mental hospital where she lived for over 60 years when she died at the age of 105.

Despite the turn of the century rumour mill that surrounded this coin, historically speaking MacNeil most likely used either Doris Doscher or Irene MacDowell. Dorcher was a professional model, but MacDowell, a family friend and was prefered by MacNeil, but not his wife. In order to avoid anyone getting shot, its possible that the Doscher story was a ruse made for his wife's benifit. It is most likely a composite of them both, and perhaps why the head on the SLQ is a little unspecific in its details.

The Standing Liberty Quarter, Mercury Dime and Walking Liberty Half dollar were all part of a competition for new designed announced by the mint in 1915. All three designs were strongly influenced by the work done by Saint Gauden on the American Double Eagle Gold coins. The dramatic sweeping detail, and focus on design movement gave these coins a theaterical flare which makes them very popular with collectors.

But after about 6 months of our Liberty Nymph triumpnatly posed astride our quarter design, the more conservative forces of Edwardian Society began to protest. Anthony Comstock's Society for the Suppression of Vice, an organization strongly in need of an acronym, His organization pelted Secretary of the Treasury, Bill McAdoo with commplaints. But even prior to this MacNeil and Mcado had worked on coin redesign to make the coin more resiliant to wear and part of this redesign was the addition of the chain mail to Liberty, turning our Nymph into a Knight of Freedom overnight. Hence, we have two designs for the Standing Liberty Quarter, a Type one from the rare 1916 patterns that found their way into circulation, and the early 1917 series. From the second half of 1917 on until 1930 the TypeII design was in circulation.

We only have two examples of a Standing Liberty Quarter up to this point, a situation I'll be hoping to correct as time goes forward. Here is the Obverse and Reverse of the Type I 1917. This is one of raw coins I've collected over the years. I leave it to you to decide on a grade. 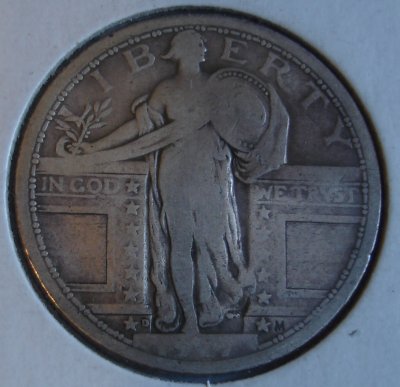 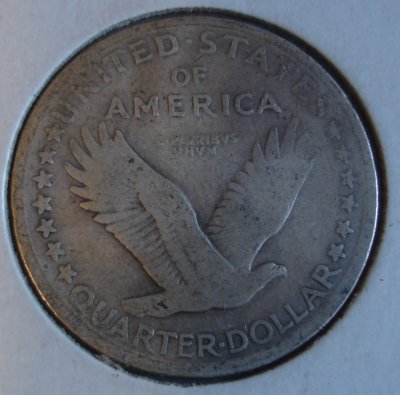 Reverse of the 1917 Type I Standing Liberty Quarter

This is the Type II 1929-D, not a particularly pretty coin in perhaps VG conditions. 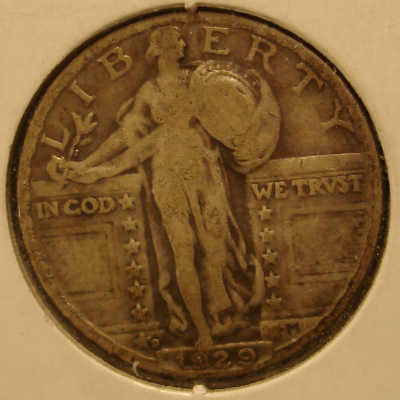 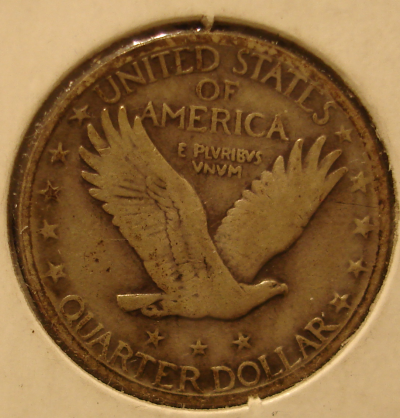 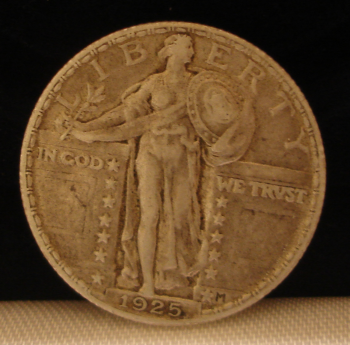 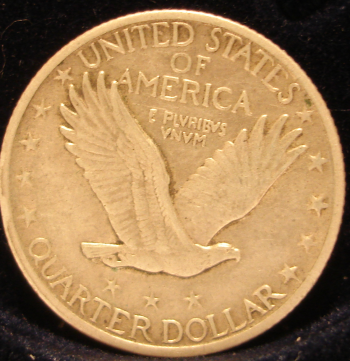 This example which has been added to the collection in November of 2008 is a very fine example of a 1930 Standing Liberty Quarter, nearly in mint condition and arguably a full head with great tone. One of the nicest Standing Liberty Quarters I'd had a chance to aquire at a reasonable cost, this coin should probably go out to be slabbed in the future. In fact the luster is so good for this coin I made a movie of it to view how light dances off the surface of this nice example. 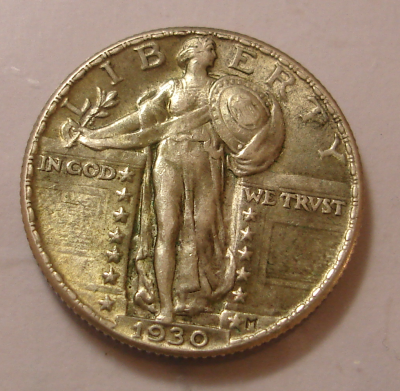 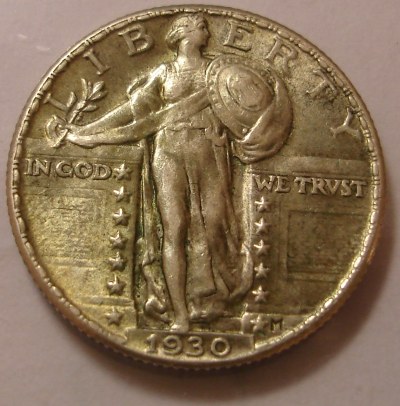 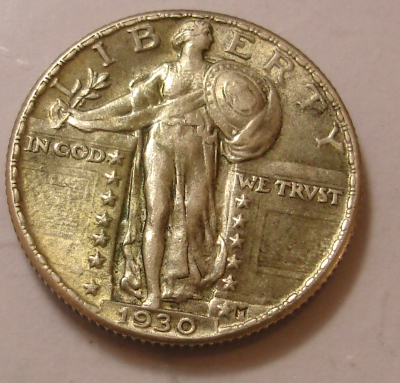 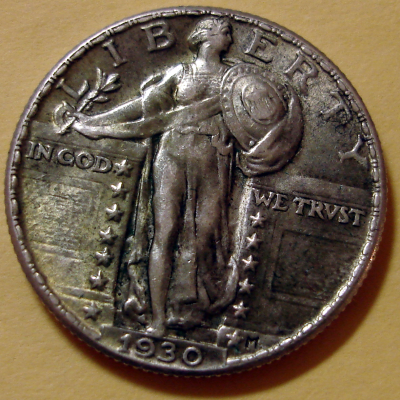 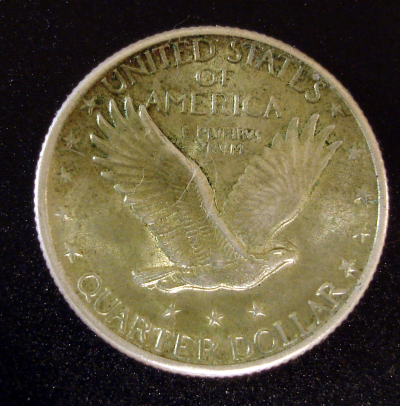 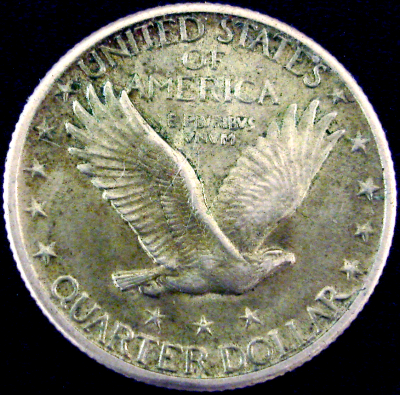 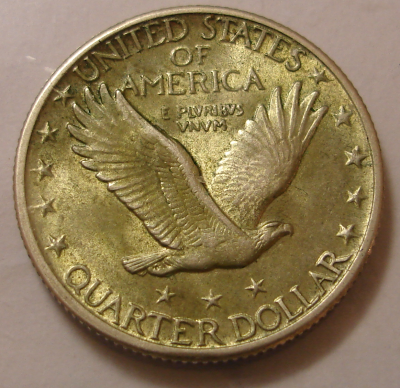 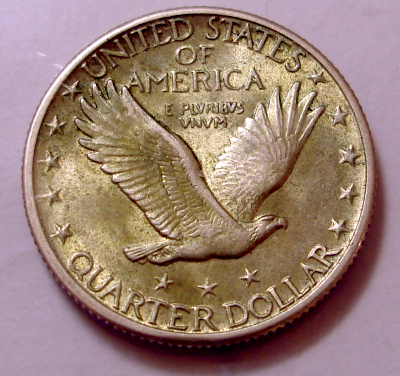 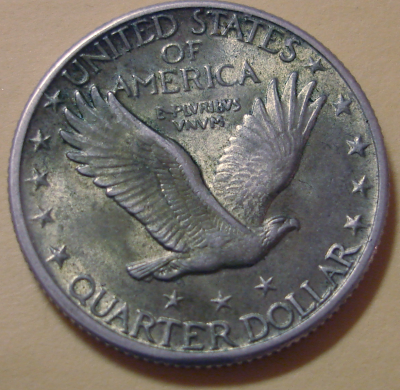 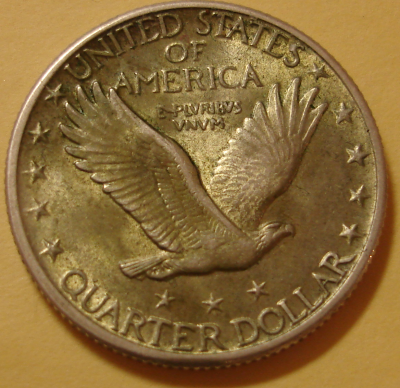 1917 with a wonderful strike 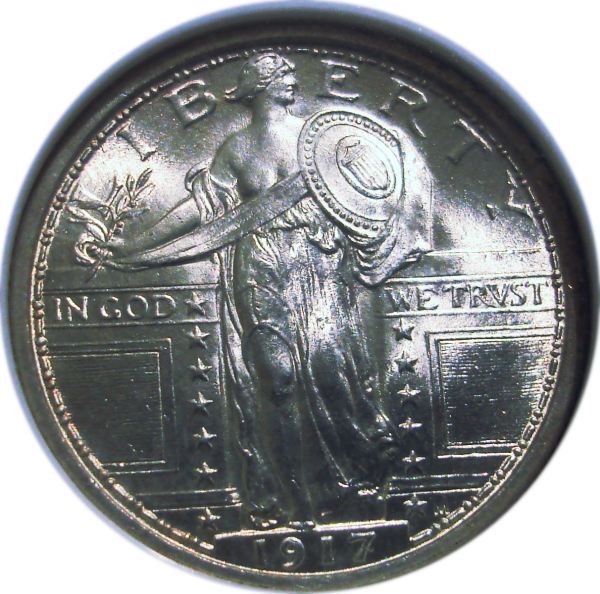 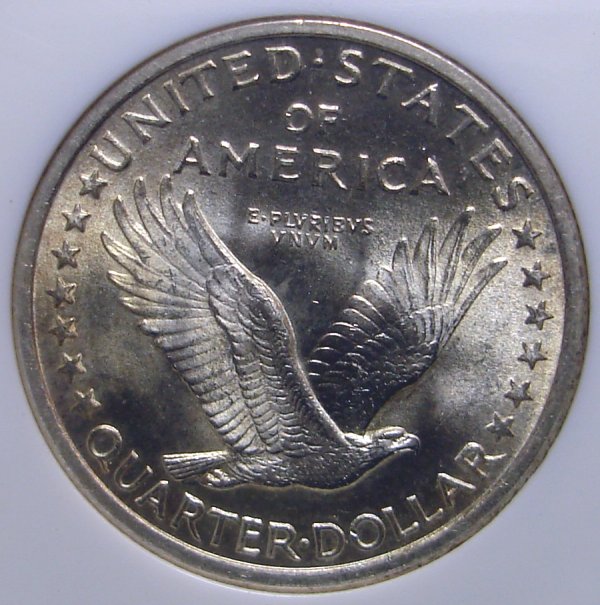 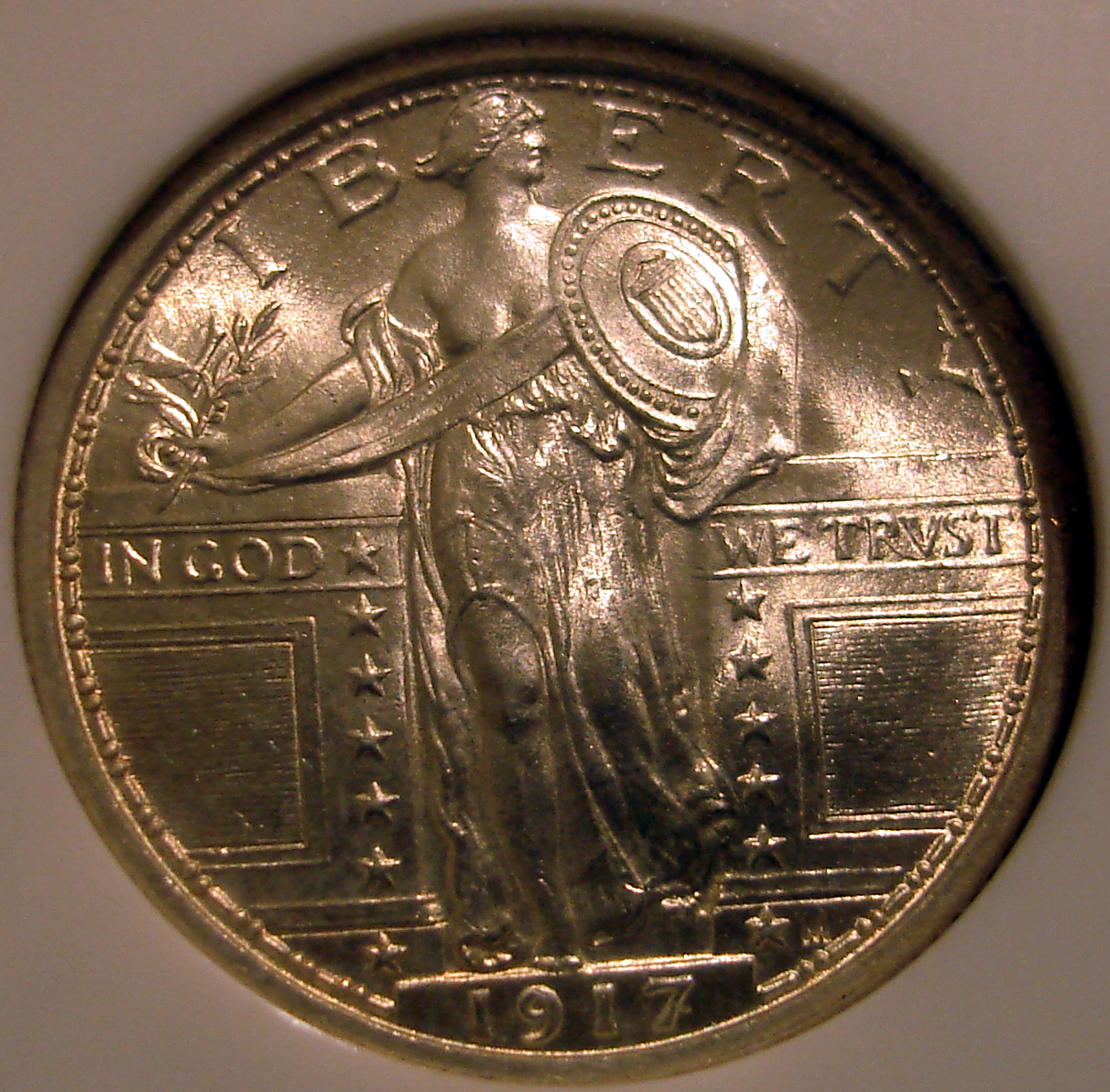 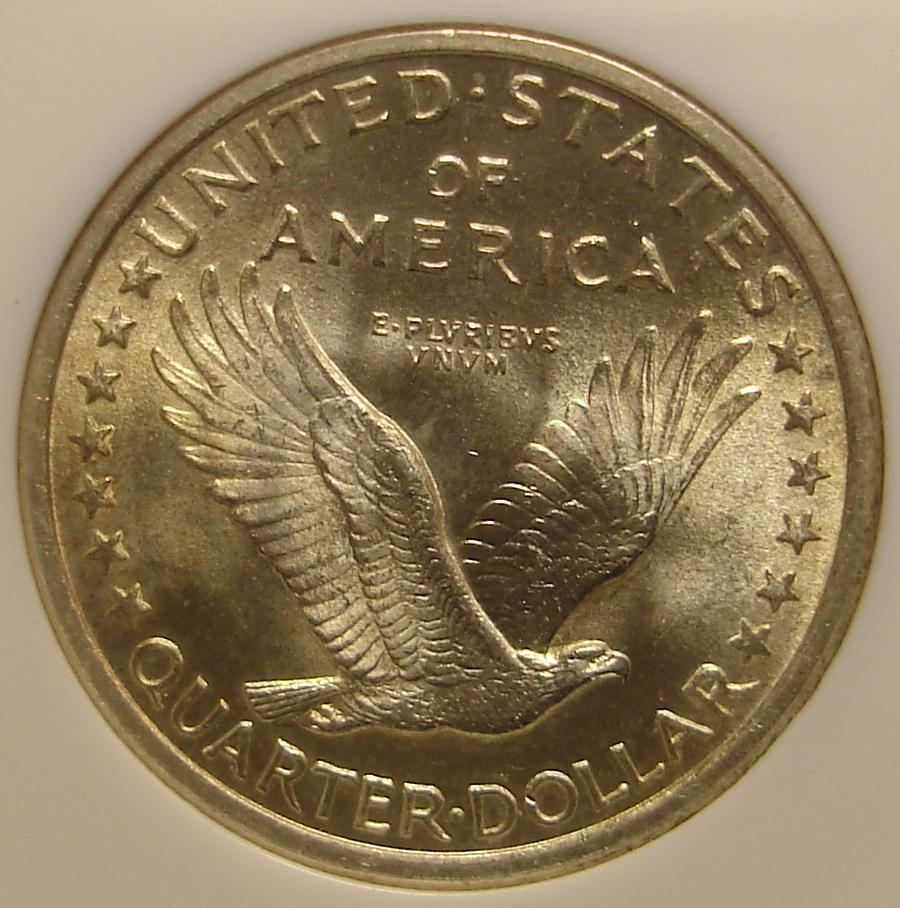