Fri Dec 2 01:29:59 2022
One of the nicest of these is the One Ounce 99.9 Silver proof of the Australian Dugong for the 2012 Perth ANDA Coin show. This wonderfully colored coin has a reverse coloration where the background is colored but the device, the Duggong, is finally etched into the coin, and struck in a way that gives great mass to this aquatic mammal, while still presenting a feeling of weightlessness. Related to the North Amaerican Manatee, this gentle creature is a salt water vegitarian.

The Duggong ranges from Northern Australia to Indonesia, with particular concentrations in Sharks Bay and Northern Australia. It has been hunted by oboriginal tribes for thousands of years, and previously by modern Western populations. It is considered vernable to extinction. Personally, I don't think of food when I see this animal, but I'm not a starving aboriginal.

To Learn more about the Duggong see its wikipedia entry.

The coin itself is one of the best ever done by the Perth mint and right up there as one of the great coin designes of the decade. 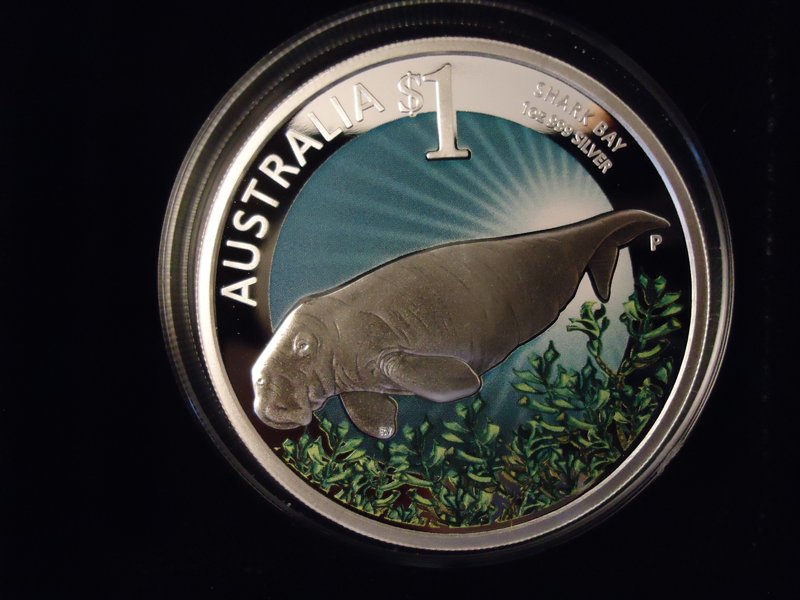 Do yourself a favor and look at the close up of this coin and remember that the animal itself has no color. It is just a wonderful coin.

Here is a Archive of Dugong Images.