Fri Dec 2 00:52:14 2022 Barber Half Dollars were part of a the set of Barber coins that included the Barber Dime, Barber Quarter and the Half Dollar. Up until this time this was the common way in which the US released coins, with the dime, quarter and halfs being of the same design.

The Barber series was designed by made by the US Mints Chief Engraver from 1879 until 1917, when he died. Barber's father, William Barber, was also an engraver and Charles Barber became the chief engraver when his father died in August 1879. Charles Barber's tenure as chief engraver was surrouded by strife as new ideas with regard to coin design and for that matter ideas of proper modern governance were skillfully navigated by Barber who owed his logivity in office as much to his political skills as much as his artistics skills. Aside from his political skills, however, Barber was a brilent engraver and as time progresses and the political fallout is forgotten over time we are left with just the art of the Barber coins, and they are largely breath taking.

In 1879, the Mint recruited and strongly pushed for the import of the brilent English engraver George T Morgan. Morgan was lured to the United States with the promise of consideration for the promotion to higher offices at the Mint which was largely controlled by the Barber family. Turf wars broke out about office space, but Morgan was able to submit and get accepted the most beautiful Morgan Dollar. When William Barber died, the mint considered Morgan, but finally settled on Charles Barber. In truth, between Morgan and Charles Barber, the mint might never of had as much talent in its engraving staff, despite the turf wars and arguing. When finally, Teddy Roosevelt was determined to overhaul American Coinage, a process largely views as a test of wills between Barber and Roosevelt, in truth we can see the Roosevelt initiatives as part of the trend towards realism and grandeur which was largely already mastered by Barber and Morgan.

Towards the end of the Barber era, Roosevelt and Barber fought over the new designs that Roosevelt wanted to bring to coinage, largely done by outside sources such as sculture Augustus Saint-Gaudens and others. Barber was, as a fact, correct, about many of the design issues as these new designs, while superior artistic designs, had continual engraving problems and the design wore poorly in the hands of the public. The later Buffalo Nickel, Saint-Gaudens dollars, the Standing Liberty Quarter, and even the Peace Dollar all suffered basic design flaws which needed correcting. The dates wore off the Nickel and Standing Liberty Quarter. The high relief of the Peace Dollar and Gold Dollar needed reworked hubs because of the poor strikes which resulted directly from the flawed designs for coinage. Meanwhile, whatever troubles existed with the Barber and Morgan series, they were minor when compared to the ambitious new designs.

And interesting reprinting of the letters concerning the Mint and the hiring or Morgan over the objections of the Barber family allows a peak at the history of these great artists and the real wroking conditions that they plied their art in. This same website on US Patterns also has a decent biography on Charles Barber.

We only have one current Barber example in our collection, but it is a great example. Here are some basic photo's of 1915 D Barber half that we have. 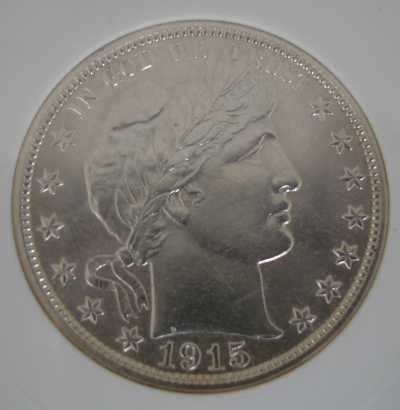 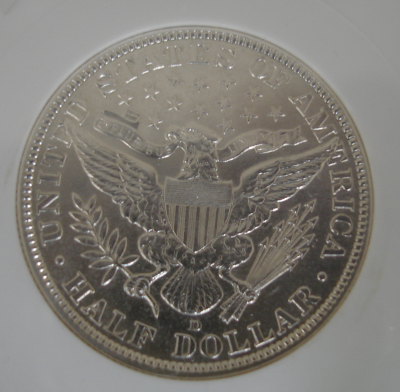 Scan Images of the same coin show the great detail of this coin with great precision but with nearly no luster. 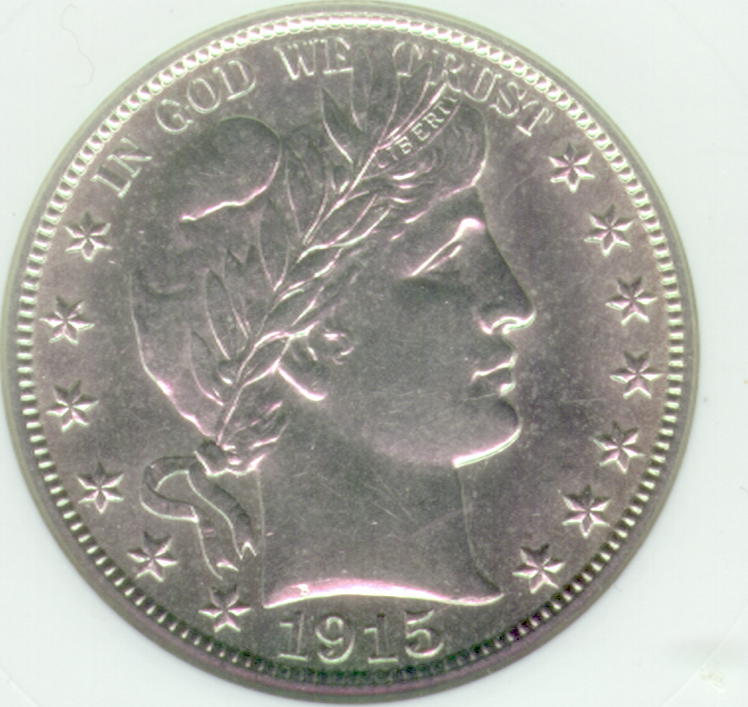 When we were originally looking these coins over, the photo's looked out of focus, especially on the obverse on the bottom. Hence, we took the detailed scan. At this point we though that what was being viewed as a focus problem was actually perhaps a double die on the date. So a new camera was aquired and more detailed photo's were taken.


One of the great things of the Barber design is the graceful way the coin wears over time. These coins, more than any other, wear out gracefully, going through several stages of beauty. I don't have an example in my collection but one can see some examples on this website dedicated to Barber Coins.

One of the great things about this coin design, perhaps unique to US coins, is the way the design breaks out into the lettering of the coin which wraps the rim. This gives the coin brilent depth and suprising boldness of a traditional protrait coin.

This coin was fairly well discussed on Here including a discussion of the mechanical doubling.