One of the great pleasures of travel in Israel, and even around the world, is the chance to discover unknown talented artists In truth, most of what one might see in artist colonies and galleries around the world is the work of hacks. And all to often, politics intermingles with real art, as it always has, but in a negative way. Too much of the art we see today, the aesthetic human quality is lost to militancy in message, which is all that is on offer.

That militancy can be theological, political, philosophical, but for true masters of the arts, especially painters, the aesthetic core is never lost. There is something inherently human, specific and largely universal to our species which we strive to express. We all try and work on our expressions, but some are just more gifted at these expressions than the rest of us. Their power of perception is superior and their power of reproduction is likewise unique. The proof of this is in the cave paintings of Chauvet, among the earliest produced in human history, and they arouse all of us, universally, even until today. And within these cave, we also find an variety of talent, some extraordinary, and some no so much.

Susie Bedrax is one of the special artists that can reach a universal artist and touches our common core. And her special ability encompasses her remarkable control of color. Susie Bedrax is one of the great modern colorists of our time. Her canvases are subtle and wonderfully modern. Her brush strokes are carefully laid out, color clashing against color, color subduing color, color enhancing color. The works enrich their environment, and not only reflect off their surroundings, but depend on their surrounding, drawing you and the room into the composition. They nearly animate. 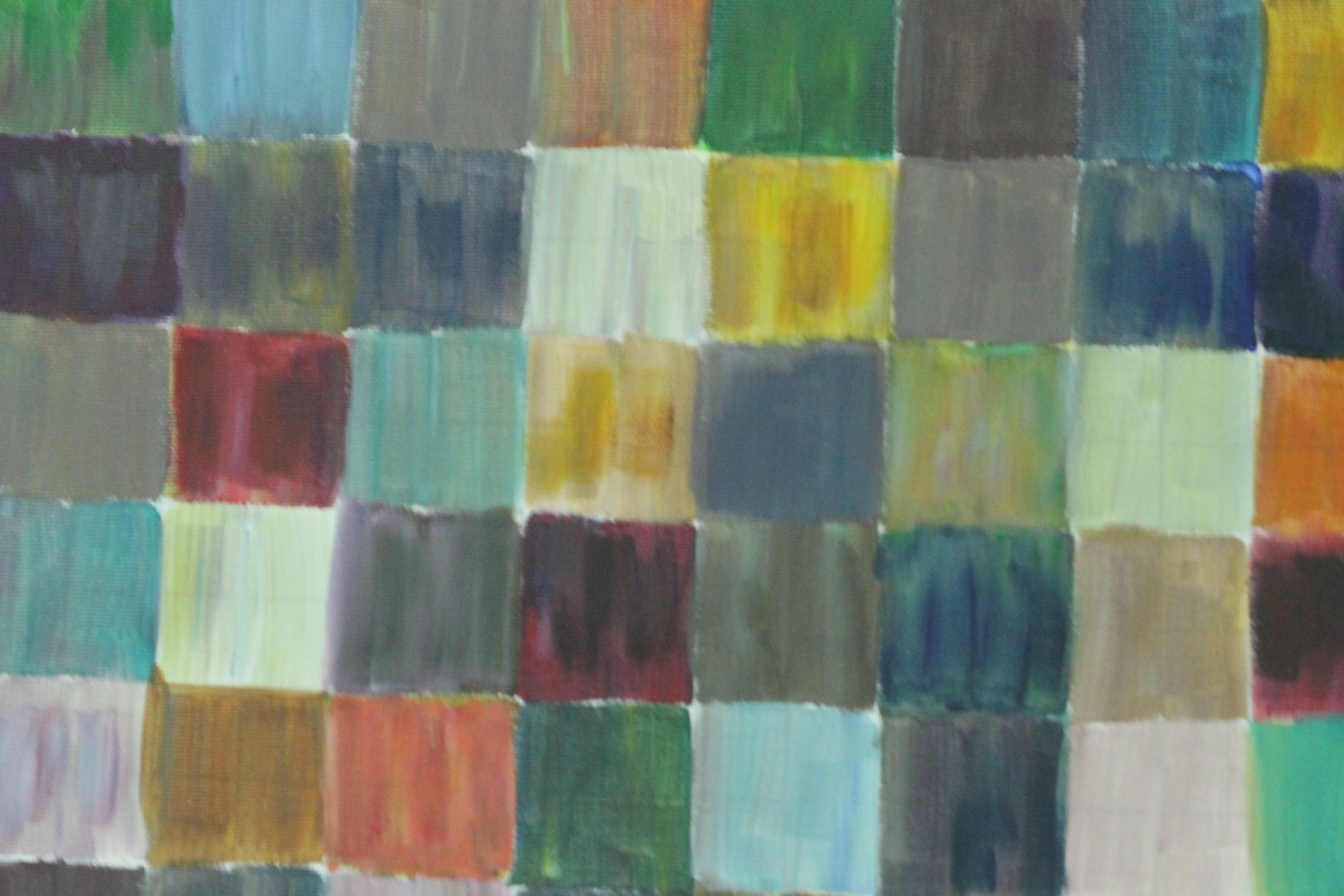 Susie Bedrax, example and close up of the collague affect

Here is an example of a simple village scene, with a bright textured moon and gently lights. The full moon has reflected by elements within the village. I took several images of this fantastic canvas, and each image reproduced the color differently. It is difficult to get a feel for this image in a passive reproduction, such as even the best cameras can produce. The colors glow gently and change in your presence as your eyes move about the canvas. The interplay between your perception of the colors, and the focus of your eye, that is the interplay between the biology of human perception, and the object, subjectively changes, as you work over the painting, exploring it with your eyes. 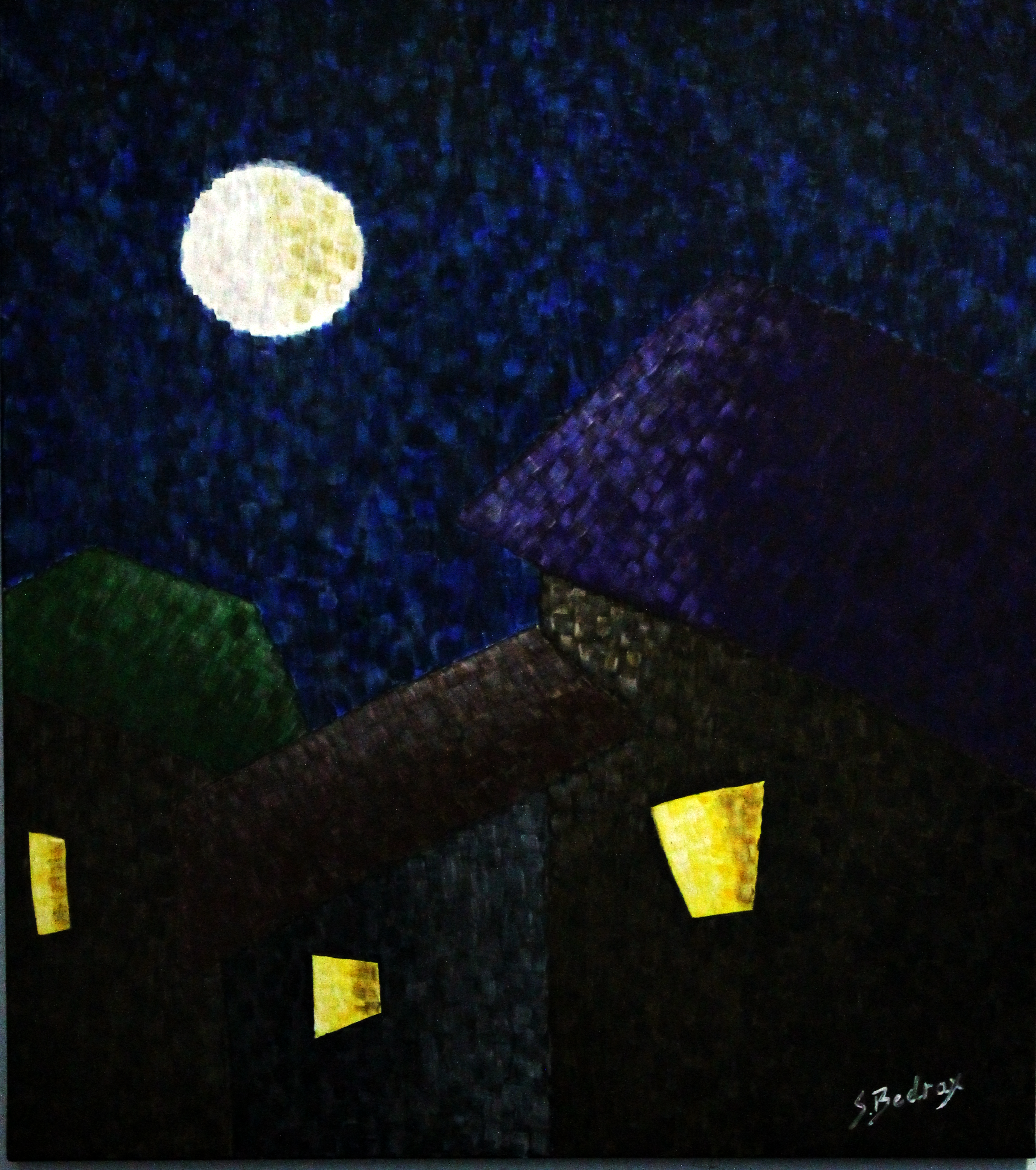 Susie Bedrax - the Village at Night 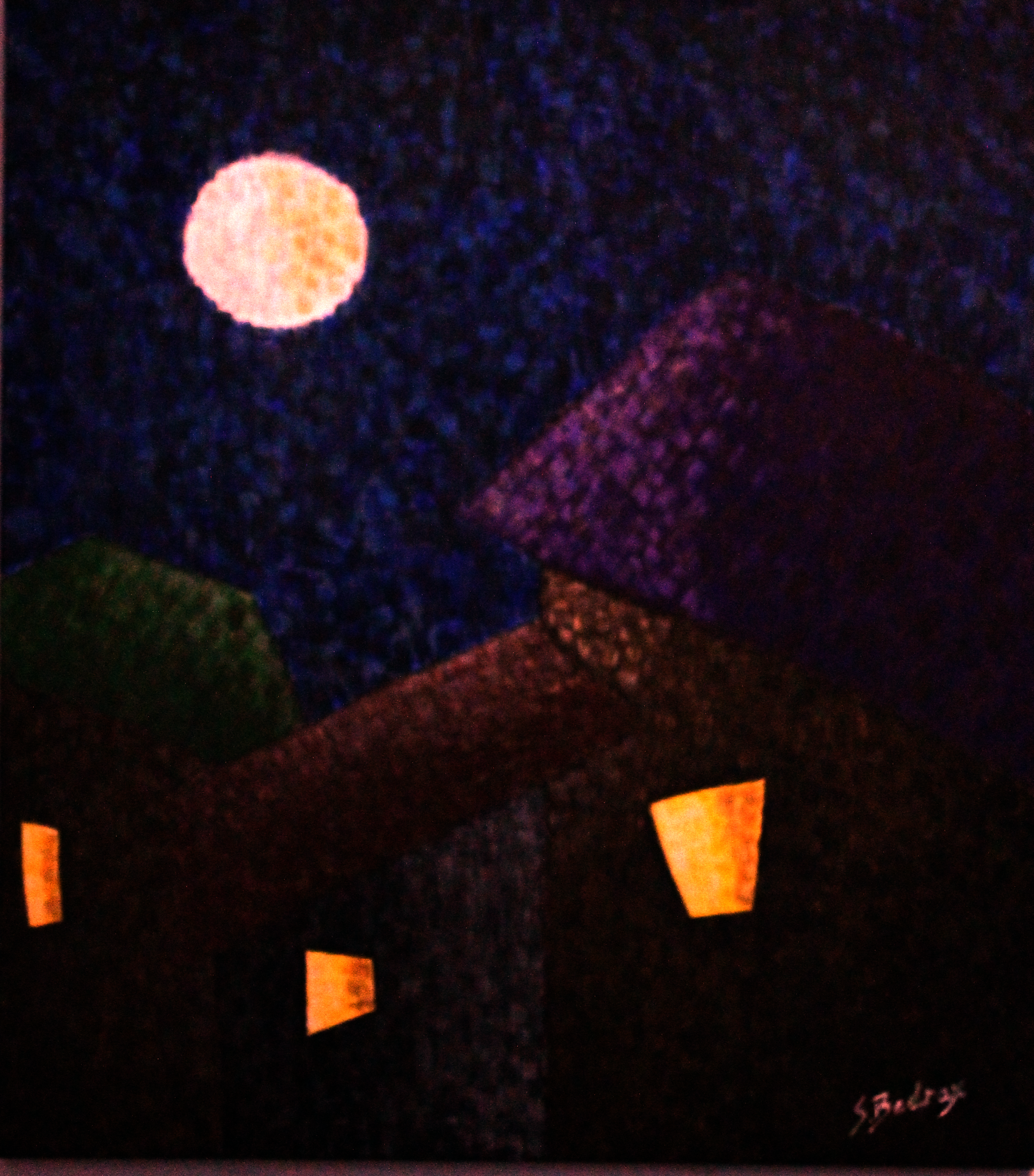 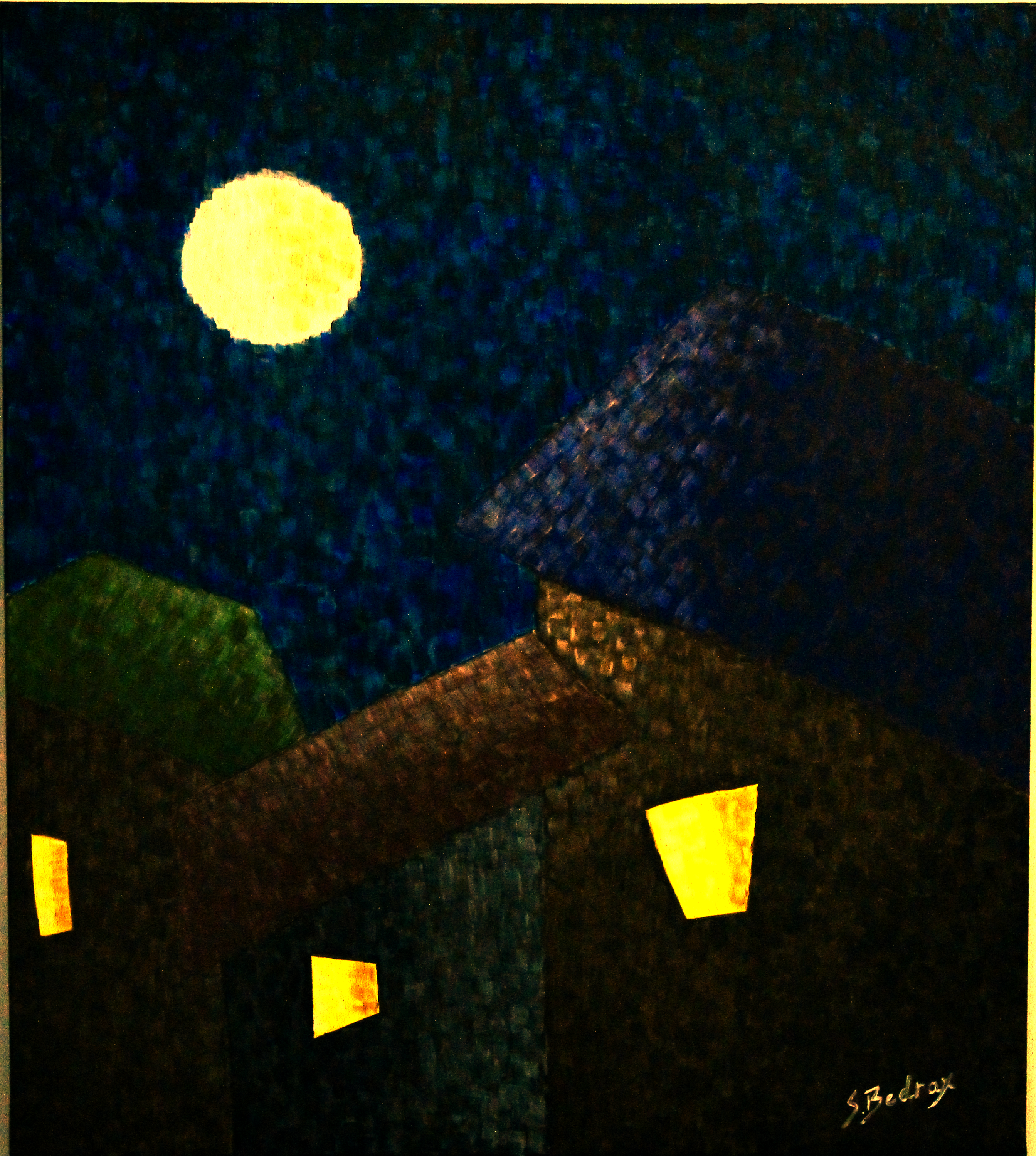 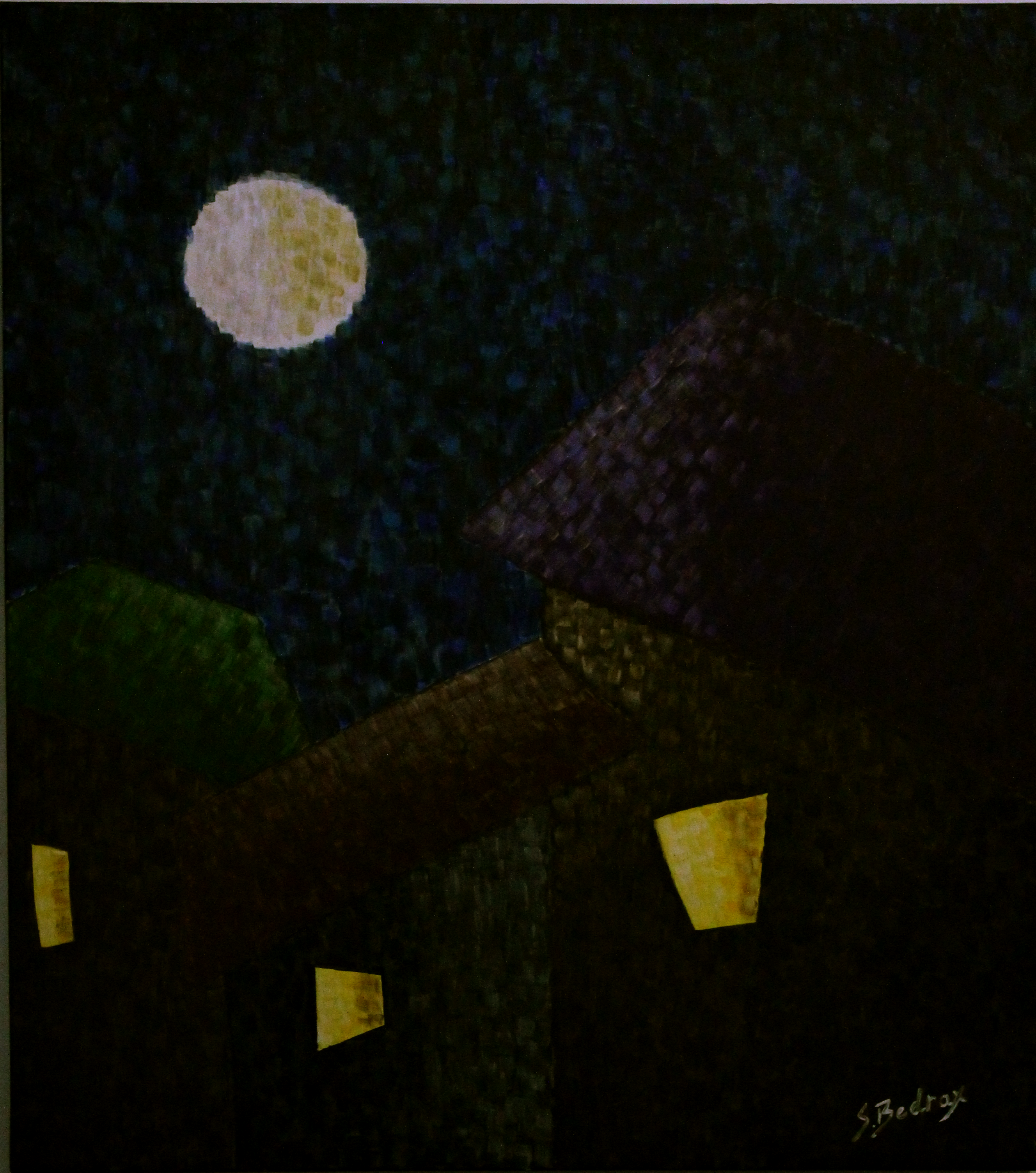 A hint of her Central American roots shows in this painting. Simplicity and warm air can be felt throughout the canvas.

Among my favorites of her works is her sets of abstract forestry. Something is worth mentioning on this topic. Painting and reproducing both foliage and woodlands has been a difficult artistic task from the earliest of times. A number of approaches to this subject appear by numerous masters. The Chinese and the Orient uses a combination of abstraction, and economized brush strokes to render, quite beautifully, a recognizable forest and woodlands. In the 11th Century, Chinese imperial artists such as Guo Xi laid of the artistic lexicon of the great classic works of art, many which now reside in the Imperial Collection in Taiwan.

By the mid-14th Century, the tradition had been expanded and great scrolls with illustrations where produce by the likes of artists such as Huang Gongwang. This truly monumental work is worth clinking on to enjoy the breadth and enormity of this classical and underappreciated work. Have patients for the download, because it is a huge detailed image and work of art.

Western representation of this subject took a different turn, partly driven by the fact that Europe was more forested than the Orient. Early attempts where nearly cartoonist in nature, especially in the Byzantine styles and church ornamentations. Even as late as the 14th and 15th century, artists like Robert Campin, renown for his detailed background, largely avoided the complexity of Trees. The Ghent Alter Piece, in its center panel, has only stylized trees in the landscape. Europeans really struggled with the representation of foliage. Bosch's Garden of Earthly Delights (1495–1505) also used stylized versions of foliage in combination with quite lifelike presentations of birds. 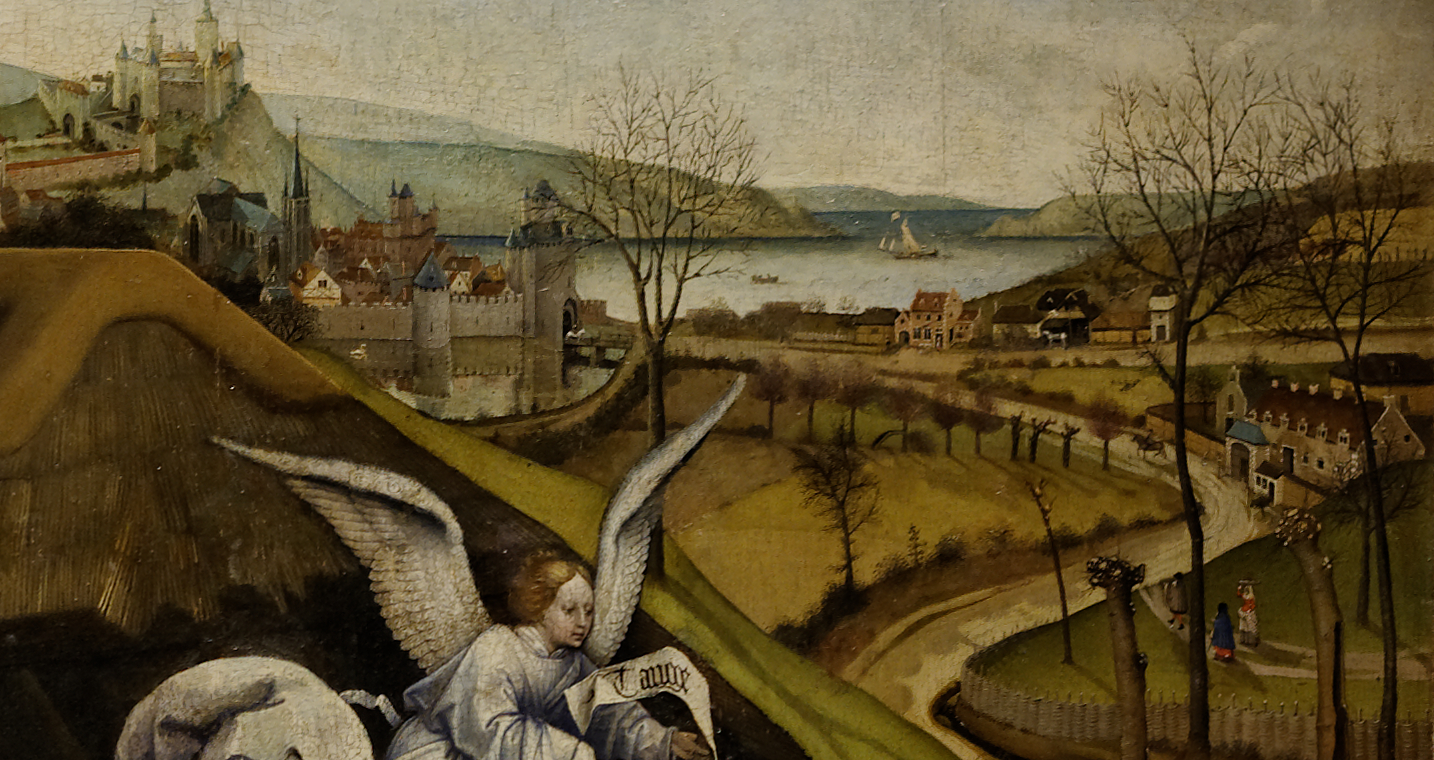 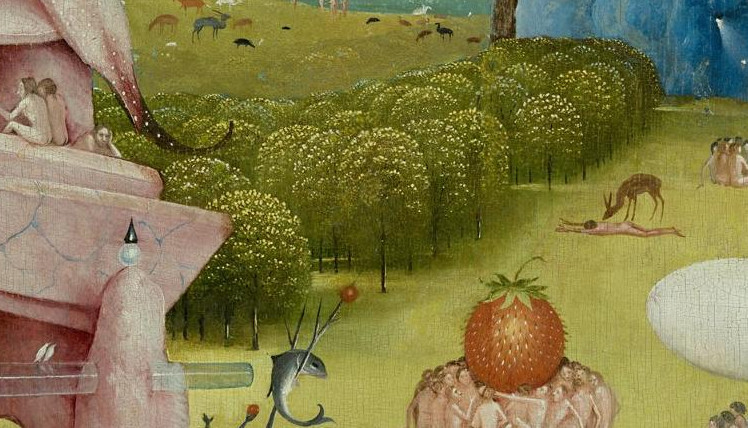 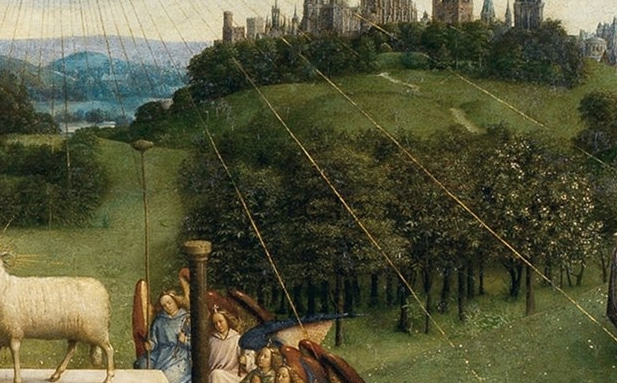 The breakthrough in foliage representation in the West evolved slowly and two of the leaders in the naturalized representation of woodlands comes with Bruegel the Elder and Germany's Albert Deuer. Deuer's early work, especially Adam and Eve, painted in 1507 with numerous derivative prints, perhaps for the first time really brings the foliage forward as a dominant artistic expression within a composition. The bark of the tree of knowledge, and the branches and the fruit, all directly lead the viewer into the drama of Eve tempting Adam with the fruit of knowledge. Bruegel, on the other hand, a full 50 years later present a very early woodlands as an integral part of composition, "The Peasant and the Nest Robber (1568)". These works significantly differ from, say the background work in Da Vinci's Mon Lisa, or even the work in London's Virgin on the Rocks. In the first case, while the background is ground breaking, it is still just an additional landscape. And in the second case, the fauna is stylized, and backgroundis barren. In this regard, Bruegel and Deuer they are not just unique for the period, but also far advanced. 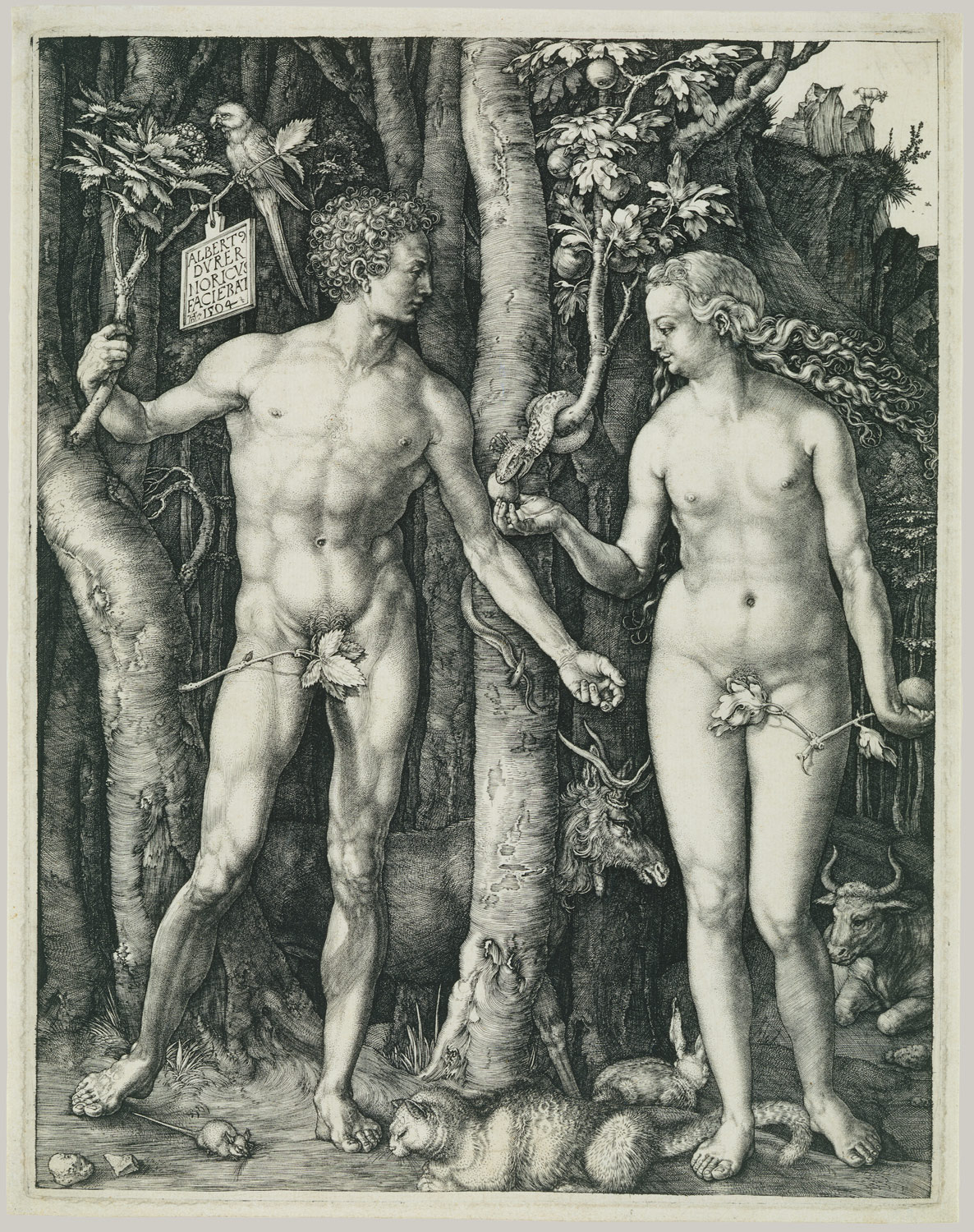 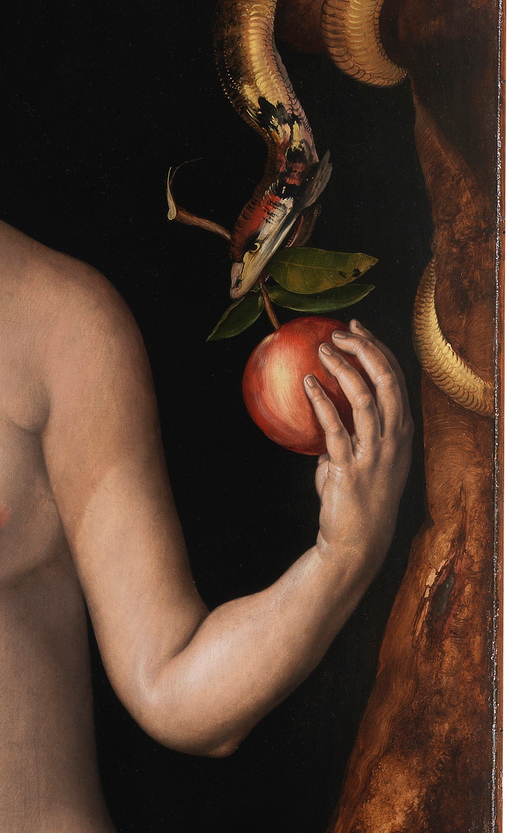 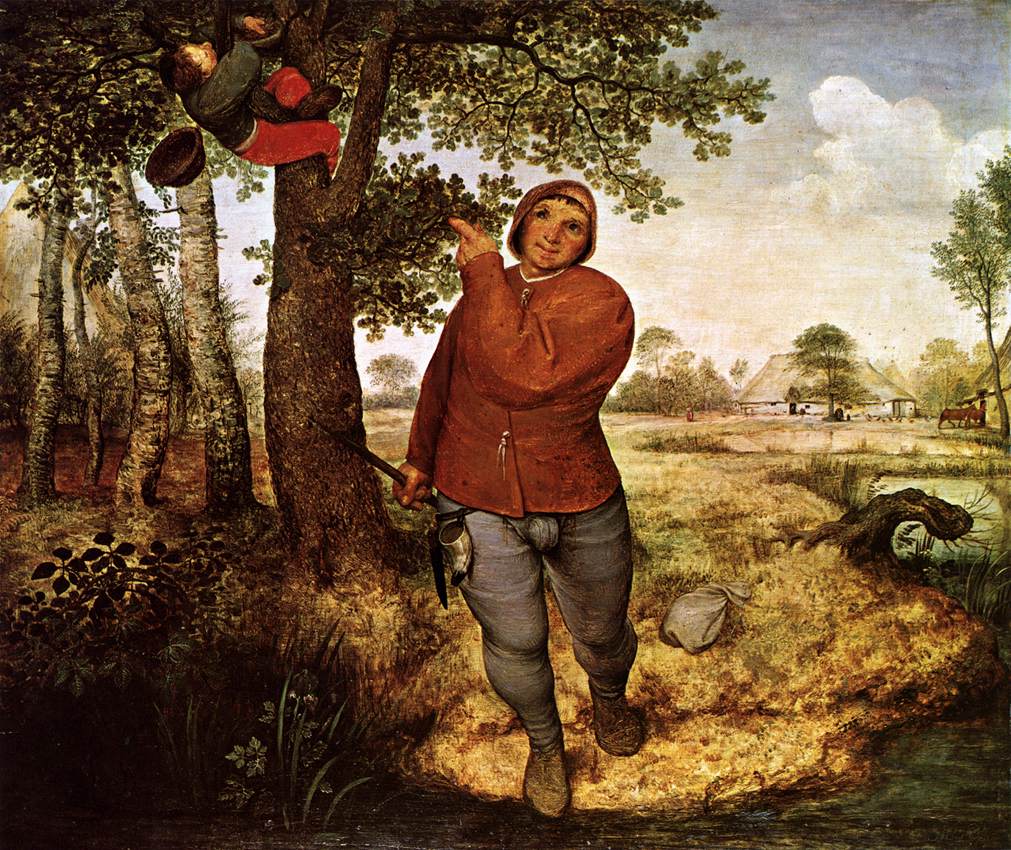 The next stage in the evolution of the artistic rendering of forestry comes from the Dutch Masters of the Dutch Golden Age. The Dutch masters moved from making foliage an element of a painting, to make it the actual subject. Landscape painting was developed by Rembrandt, Vermeer, van de Velde, Jacob van Ruisdael, Aelbert Cuyp, Reubens, and my favorite, Meindert Hobbema. Hobbema, who doesn't get his fair share of recognition, was likely the greatest landscape painter of the Dutch Golden Age. He painted what sold, and a lot of his works seem derivative of each other. And then he stopped painting iand switched careers. He was so prodigiousi, however, that he has masterpieces in nearly every worthwhile museum in the world from Detroit to the Hermitage. What makes Hobbema unique is that is compositions, and trees are whole to their environment. By that we mean that flow of wind through the paintings, and how the leaves rustle and are lit, are consistent with a real time and space. In this way, water, trees, clouds, people, are locked together in a singular movement and moment in the flow of time. No one, not even Ruisdael, did this as well as Hobbema. 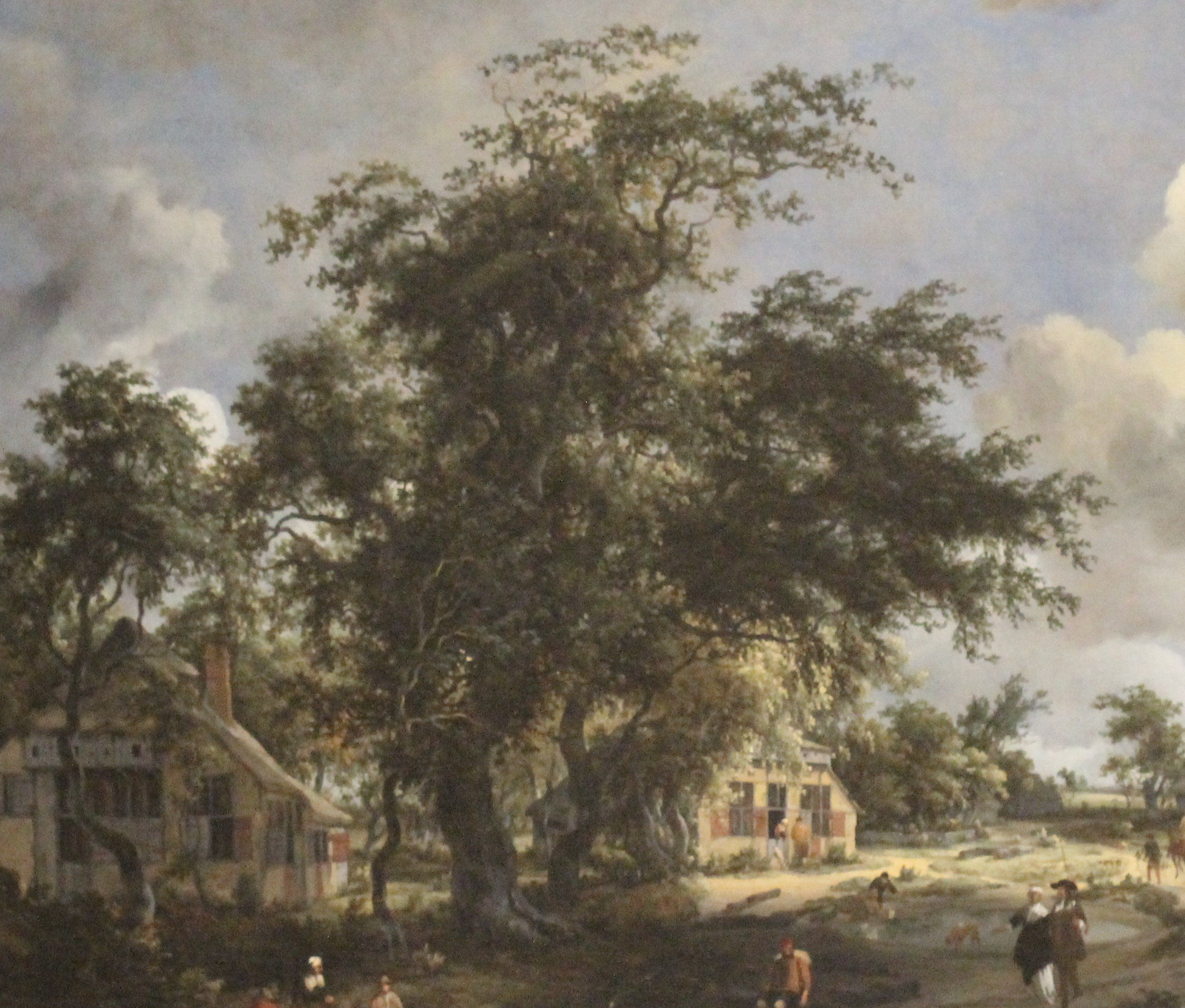 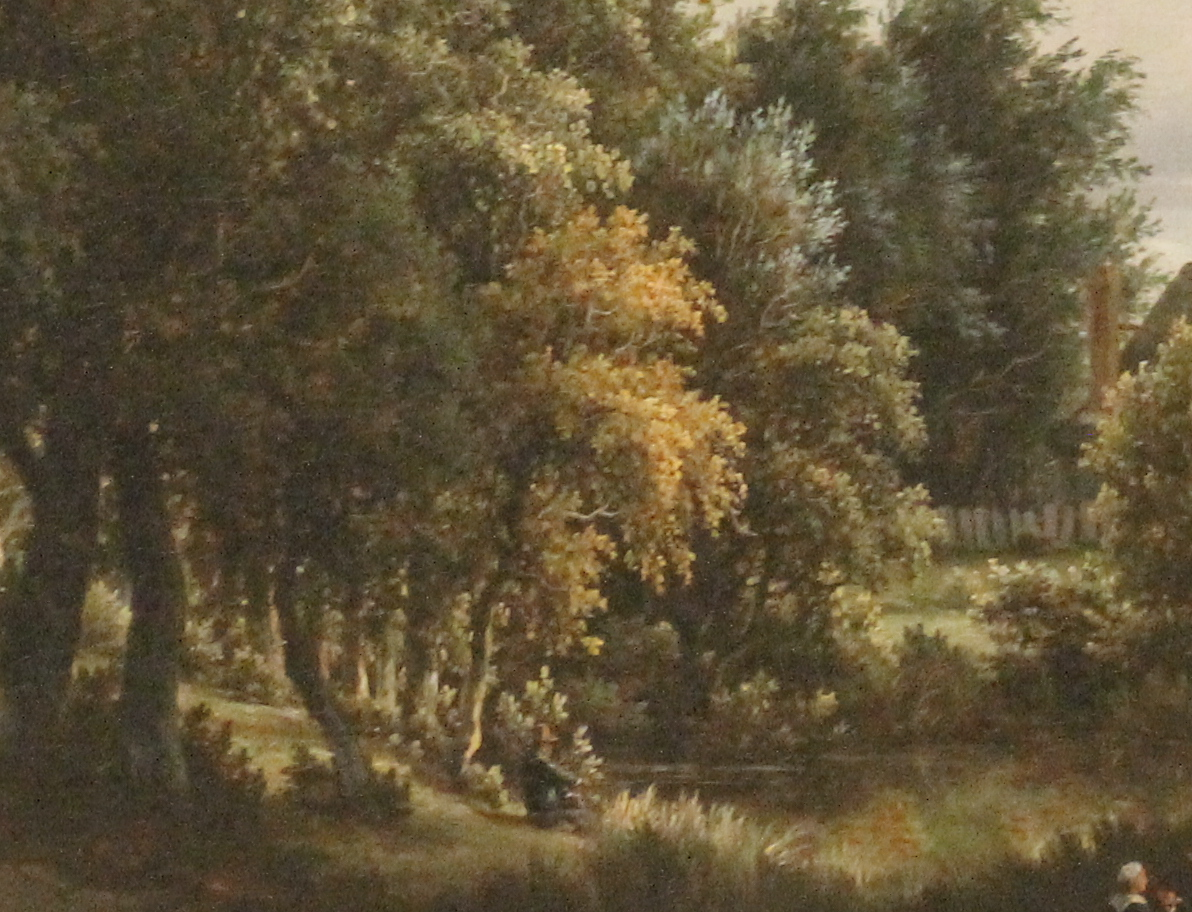 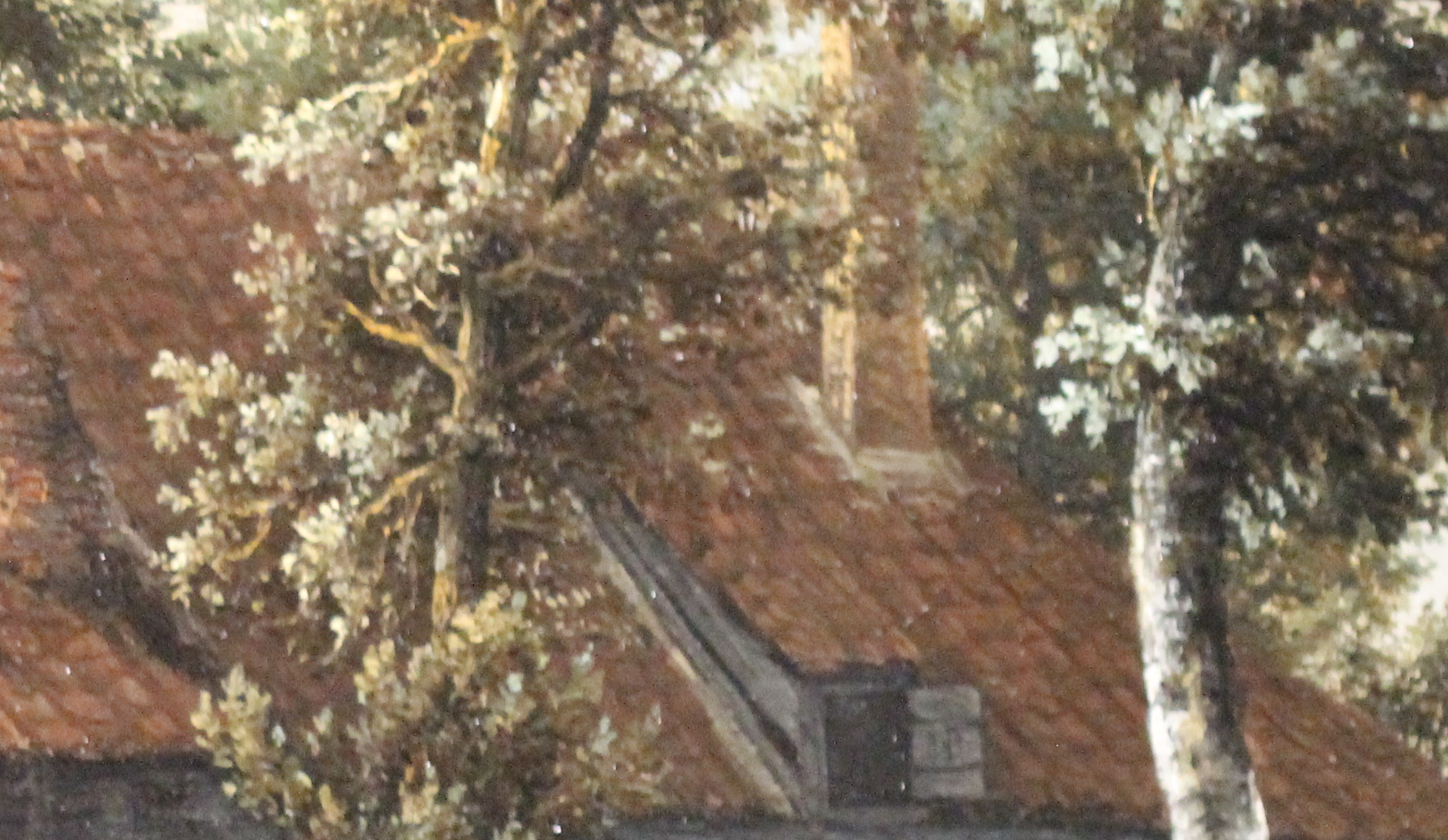 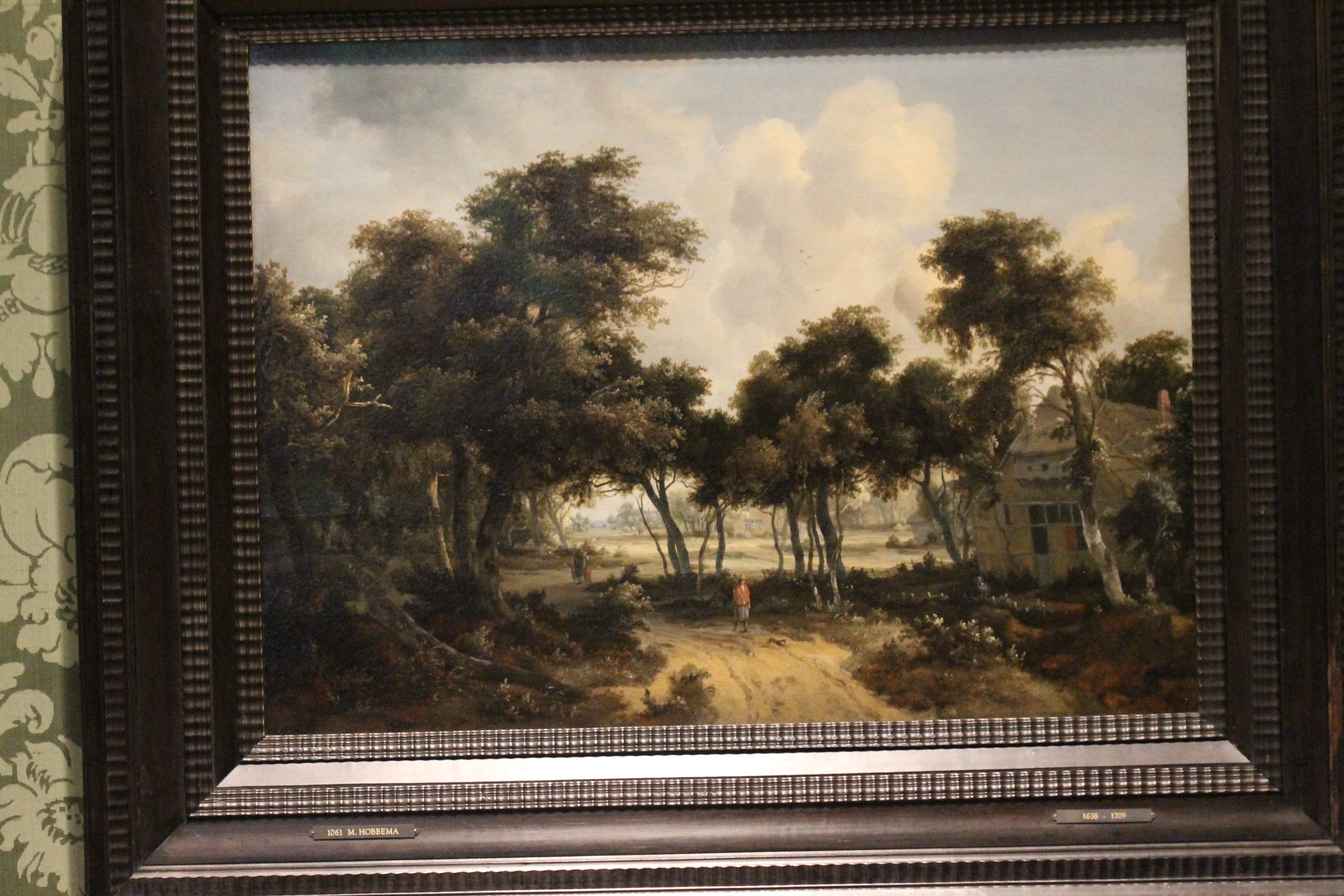 As we move into modern times, late in the 19th Century, Vincent Van Gogh redefined western landscape art, both in its abstraction and with the fusion of Oriental, and specifically Japanese, aesthetics. Van Gogh not only revolutionized landscape painting, but the specific work he did on trees was most extraordinary, novel and aberrant. You can draw a line in the history of Western Art. In the areas of landscape and woodland representation you have what exists prior to Van Gogh, and everything since. His cypress trees, almond blossoms, and understory all create new lexicon of man's interaction with a wooded environment. Van Gogh has moved foliage from a stage for human events, into a living subject personified, and representative of its own separate mysterious meaning, for which man is a interloper. 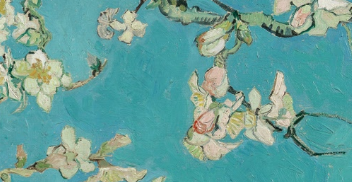 Susie Bedrax solidly continues in this long tradition, and gives us new insights into both color and fauna with original series based on woodlands and trees. She entirely removes linear art from the imagery, and leaves us with just the shadows and the glowing tones that pleasingly layers the canopy of rich forests. 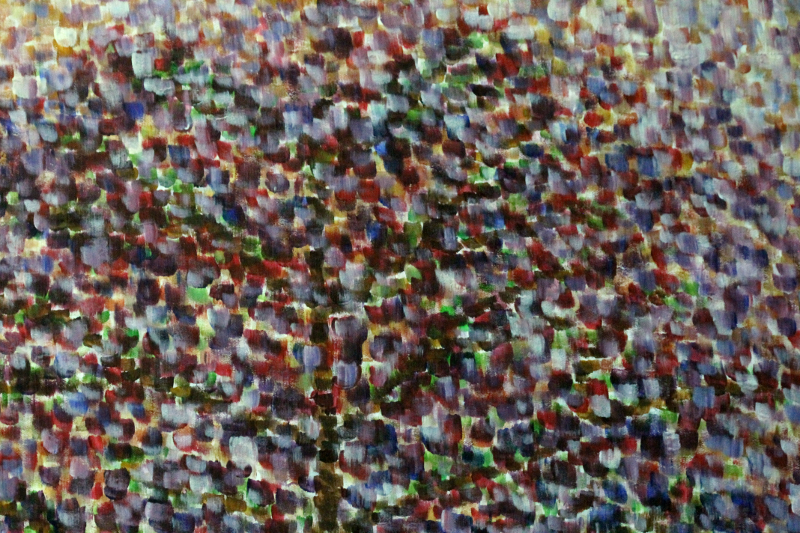 Susie Bedrax - Tree in the Sun This particular work nearly springs out of a cloud of color and chaos and forms a shape as one observes the depth of the painting. It almost has an affect as one who is standing in a thicket, focusing on a single tree out of the menagerie of the woods. Like all of Susie's work, this is a complex piece and requires several looks at it under real varying light to appreciate its richness. 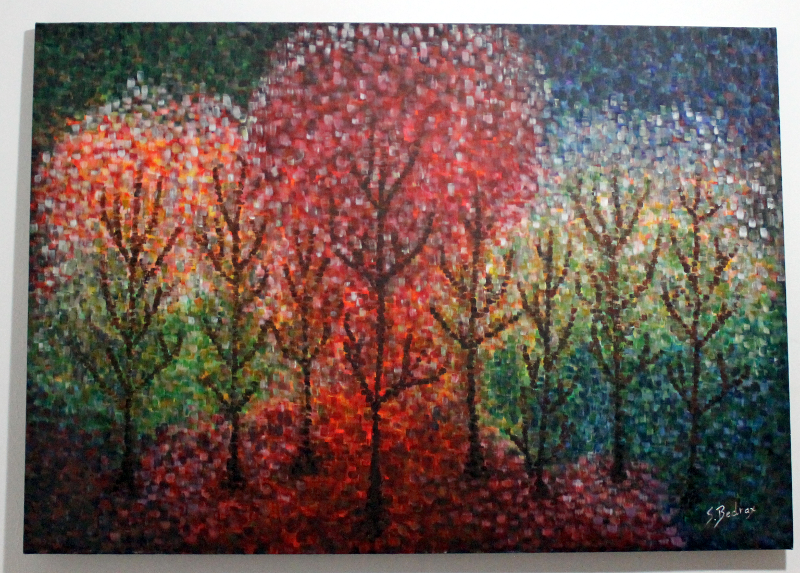 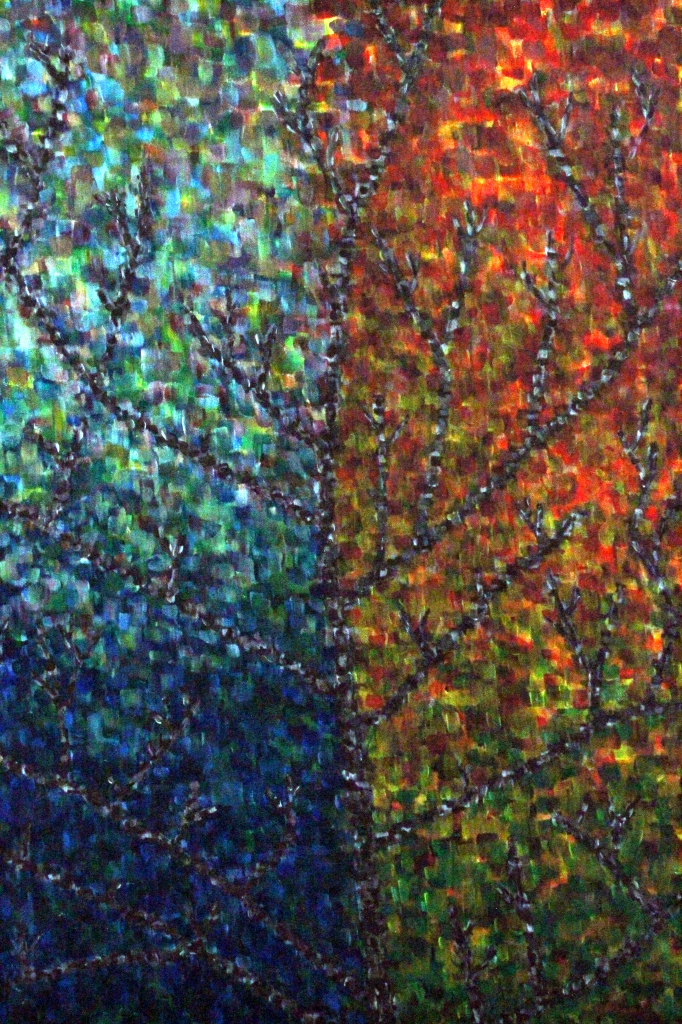 Susie Bedrax - Study of a Leaf