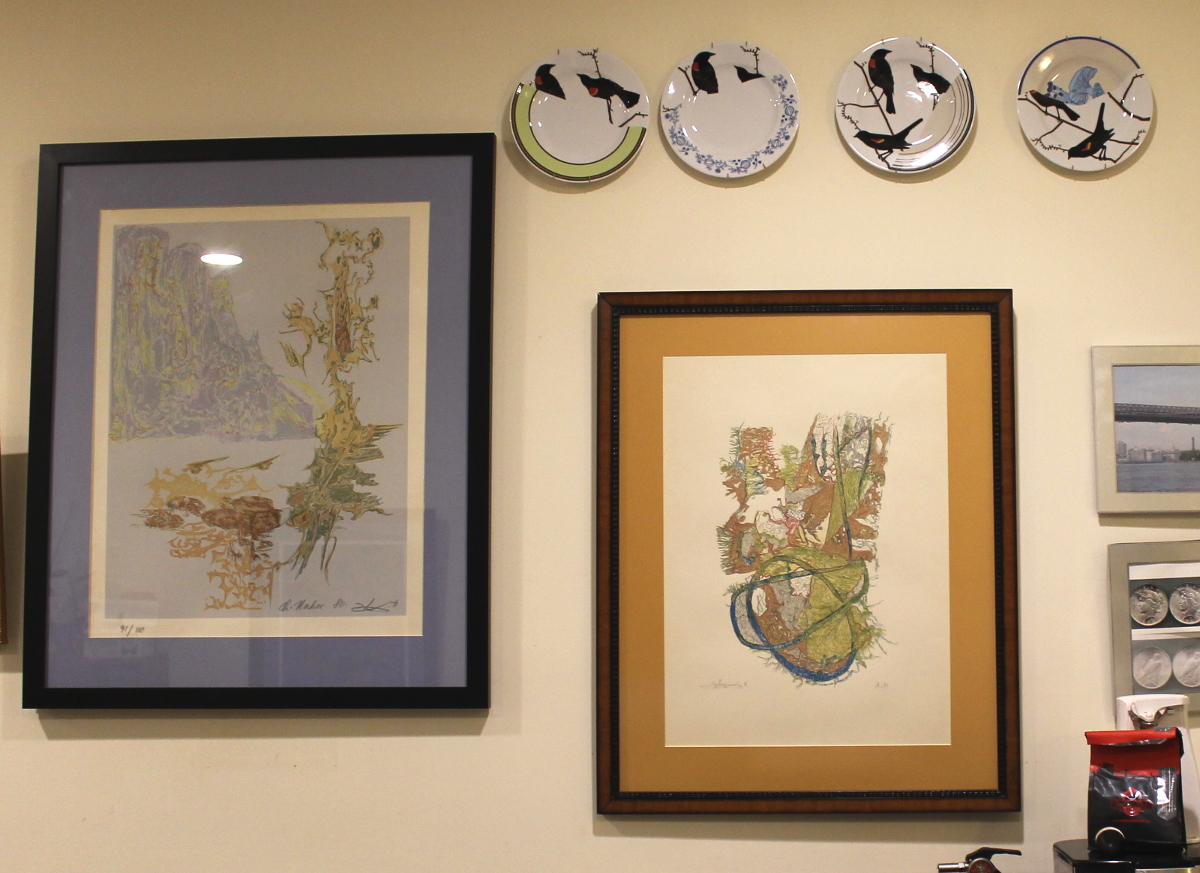 Gallery Display of Chaim Nahor's Prints in a native setting

Like many of my favorite Tzfat artists, Nahor was self-taught. He was Polish born in 1914, and when an infant his the family moved to Germany. They escaped Europe and to Israel in 1934, settling in Tel Aviv. He married a young women named Aliza and worked as a graphic designer until about 1947 when he left for Jerusalem.

He divorced Aliza and married a women his wife Ruth. This marriage took, and the couple lived for many years between Haifa and Tzfat. They traveled often to the US Following his exhibitions.
He died in 1993.

He studied Prof. Orseolo from the Fine Arts Academy of Ravenna, Italy.


RUST: A Study in Orange and Brown 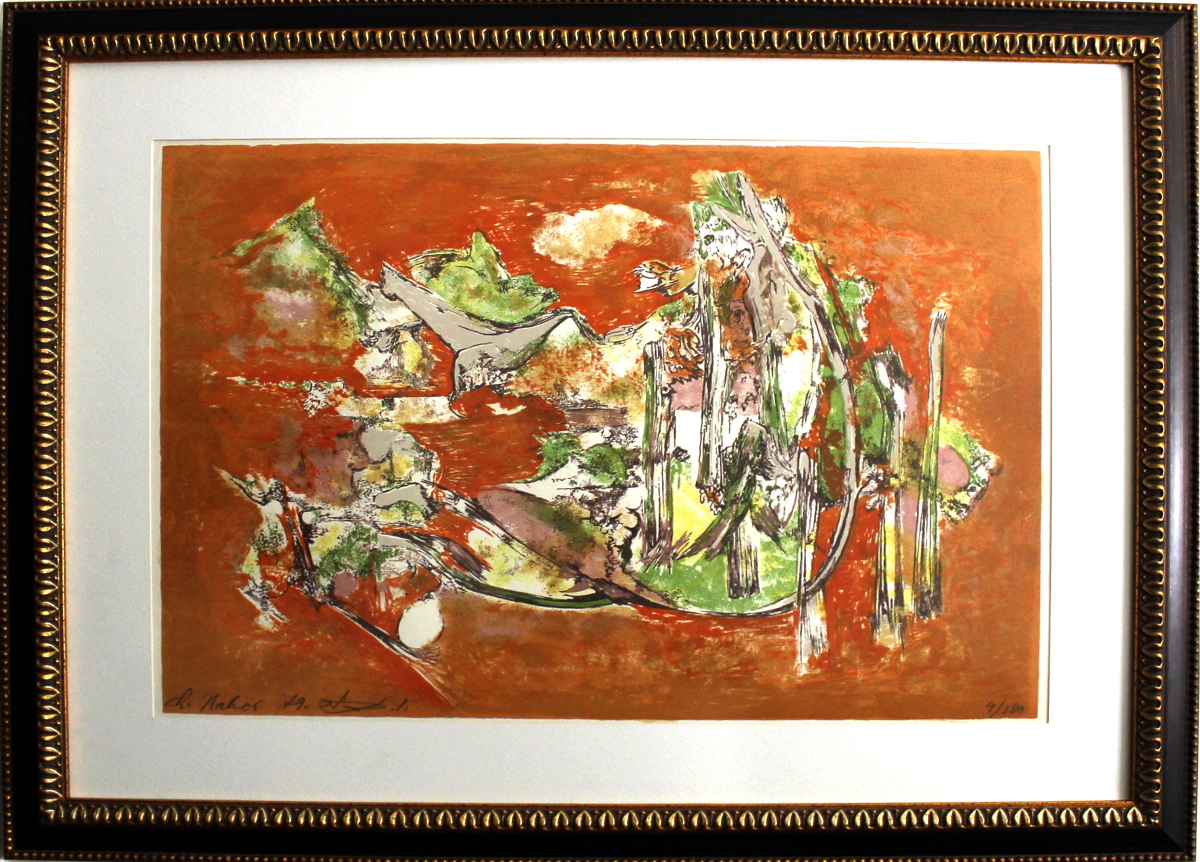 Rust, a Nahor study in Orange is one of the true masterpiece that this expert in color produced. This example is a low numbered lithograph print, produced by the masters hand. His expertise in printing technique is displayed in this remarkable work as the page has extraordinary texture that jumps off the paper and seems to change the appearance of the composition with a change in viewers angle.

This is a large work of art, with a main compositional space 28 inches across and 19 inches heigh. In its exquisite frame is nearly 38x29 inches, commanding the space about it, but gently fitting into a room.

Working largely in abstraction, the suggestion of pine and mountains, stone and moss, reaches through this composition as a brook seems to flow through the center of the image and the suggestion of the old women of the forest, arm extended in the act of painting, seems to be suggested in the upper right. 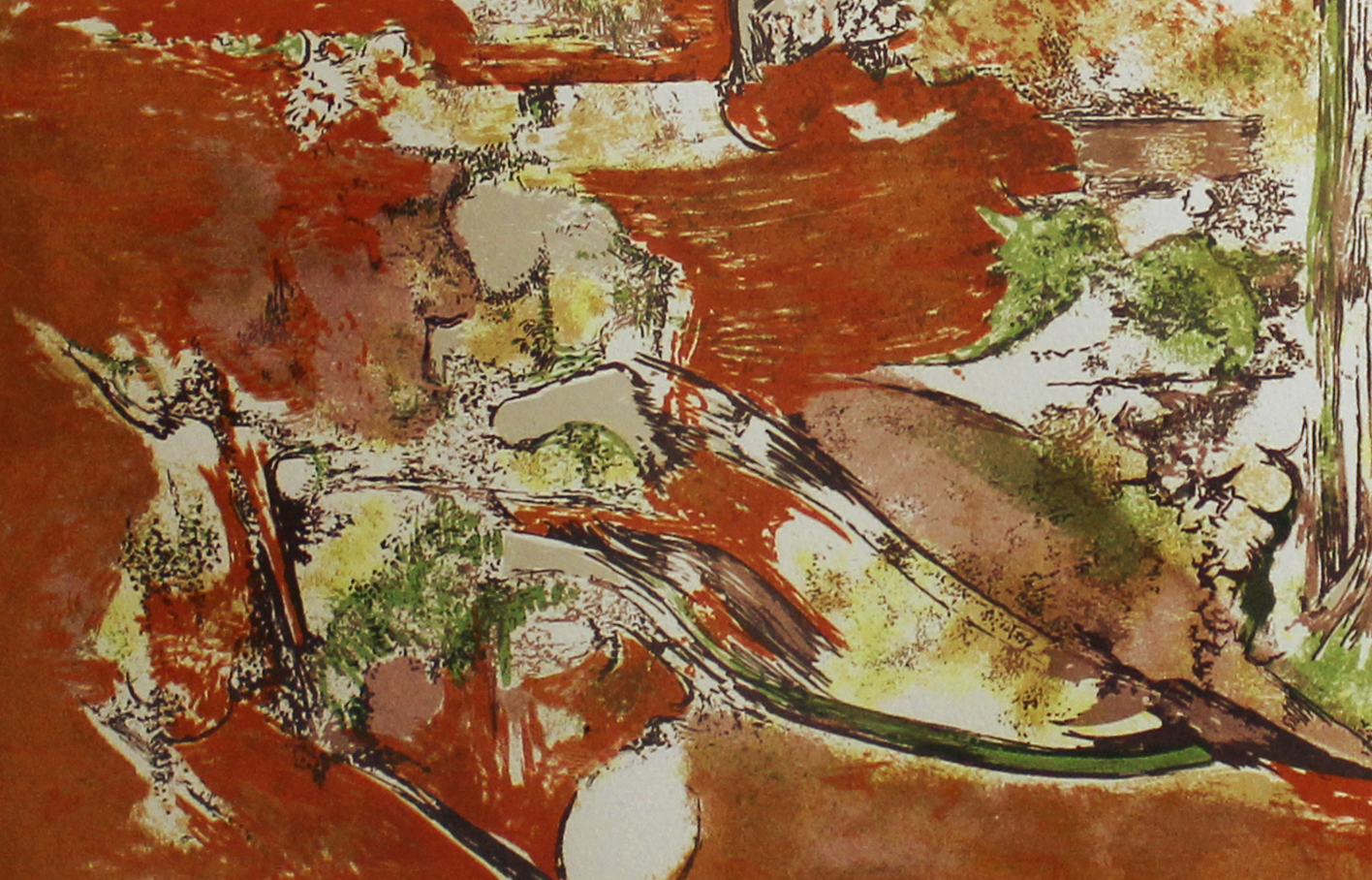 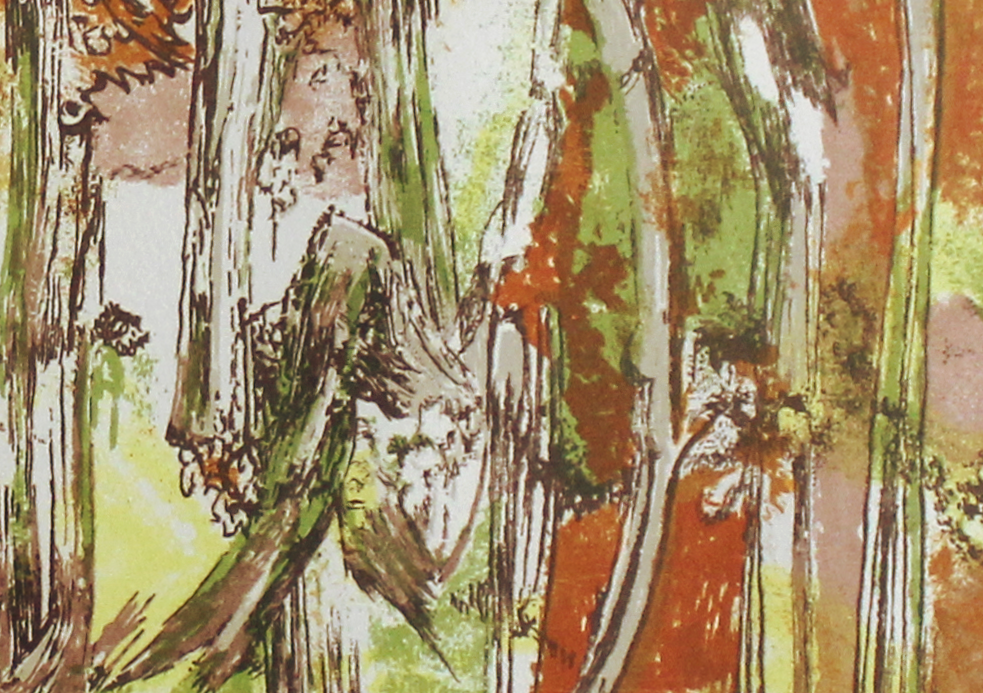 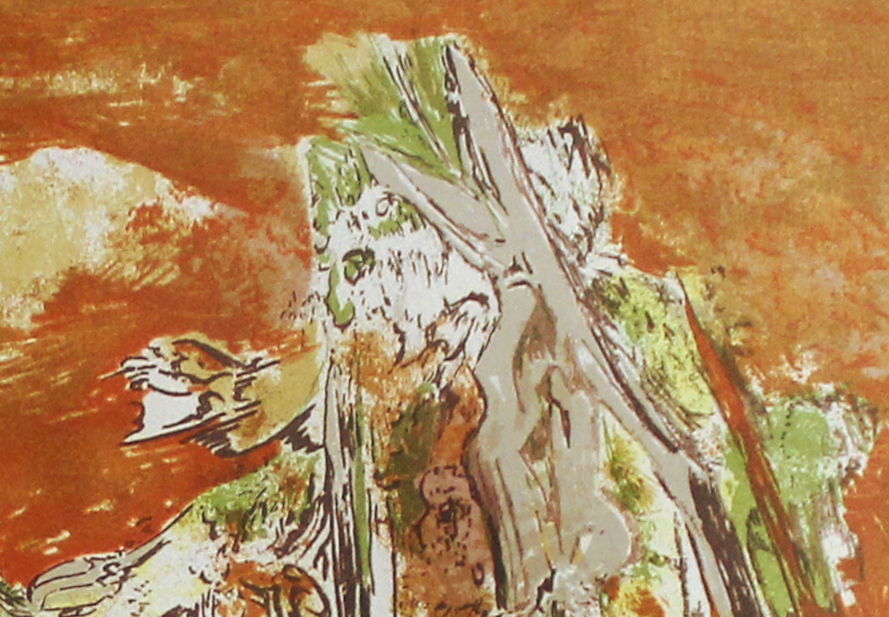 Finally, the entire composition is surrounded in a haze of orange, lifting the composition into a heavenly plain with colors that themselves are suggest by summer evenings in the city of Tzfat, who's evenings often hint of this color: 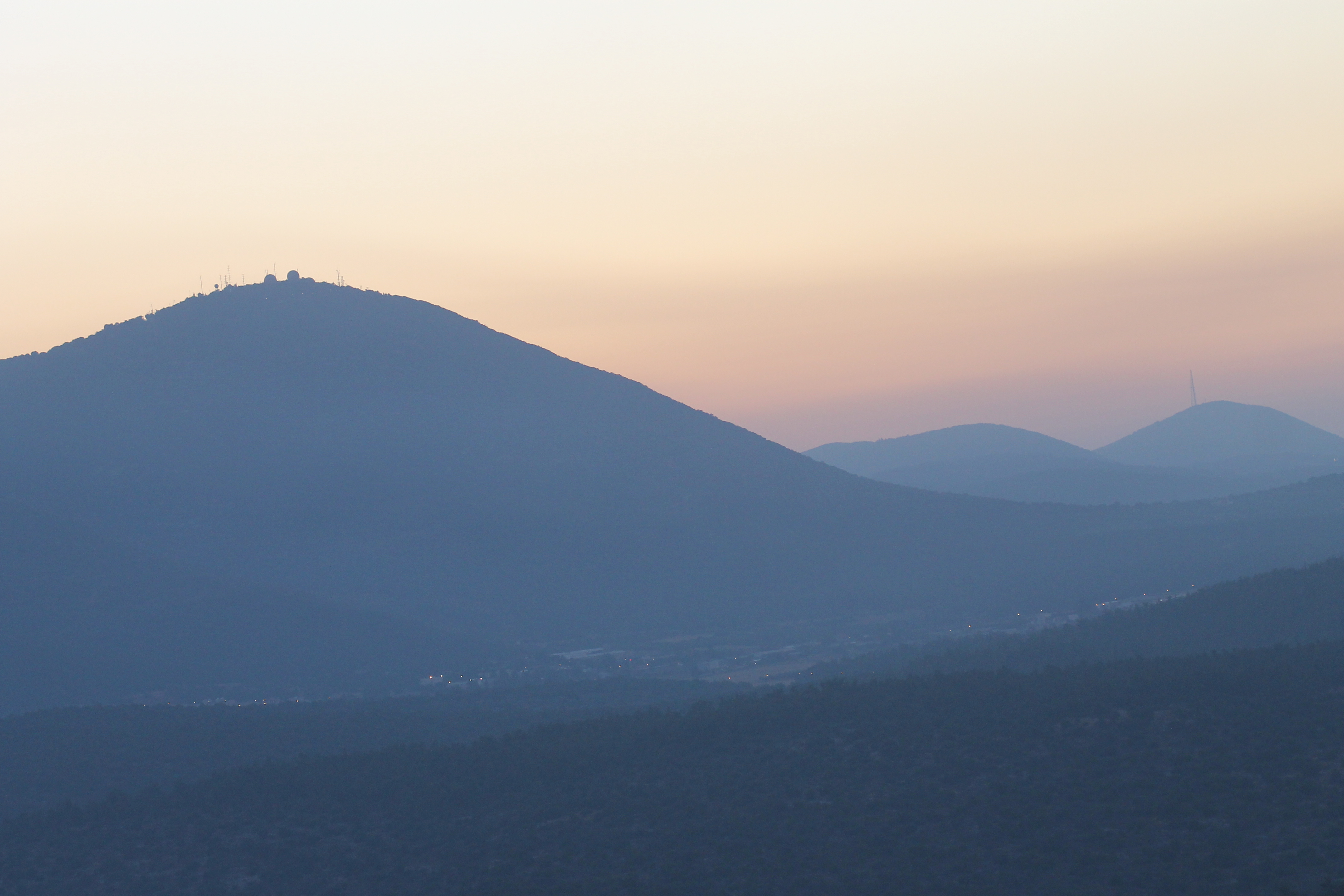 The mountain view from Tzfat at sunset

Blue Cliffs in the distance 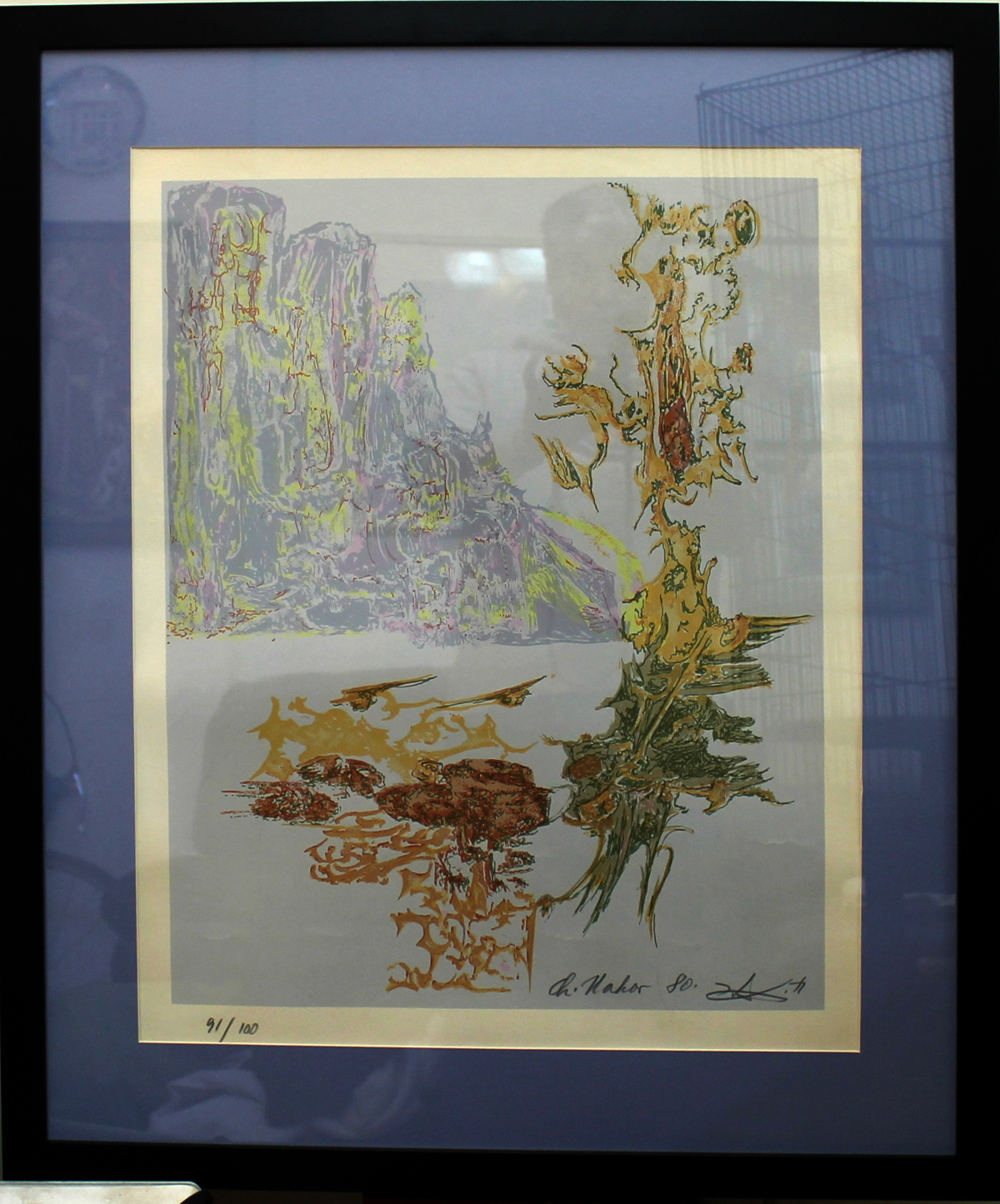 This remarkable piece dramatically illustrates the fading silhouette of far away cliffs with the use of line drawing and color. With paint, this can be readily done with brush strokes and mixing. But this print, dated from 1980, and quite popular at the time, creates this affect by using a pale blue background and a blue dominated figures. This is one of my favorite prints, and the glass it is behind is very reflective, something I hope to change before the sale of this wonderful work.

The contrasting colors of the branch that sits in front of the view of the patron adds greatly to the illusion of distance, and the contrasting color further causes the eyes to focus up front. The limits of the human eye then push the background cliffs off the part of the eye with the sharpest imaging, and induces a lack of focus where there actually isn't any. This is an extraordinary understanding of human vision, particularly for an artist who had never formally been schooled.

The image itself has contrasting swooping lines and the branches gently kiss the bottom corner of the cliff face, focusing the eyes on this action point. The pastel colors of the composition release emotional stress and suggests an early morning atmosphere, and the choice use of line further focuses the eye on the front of the image. There is more than a hint of Oriental influence on the overall design, almost as one might expect from the scrolls of the Imperial Chinese collection now housed in Taiwan. 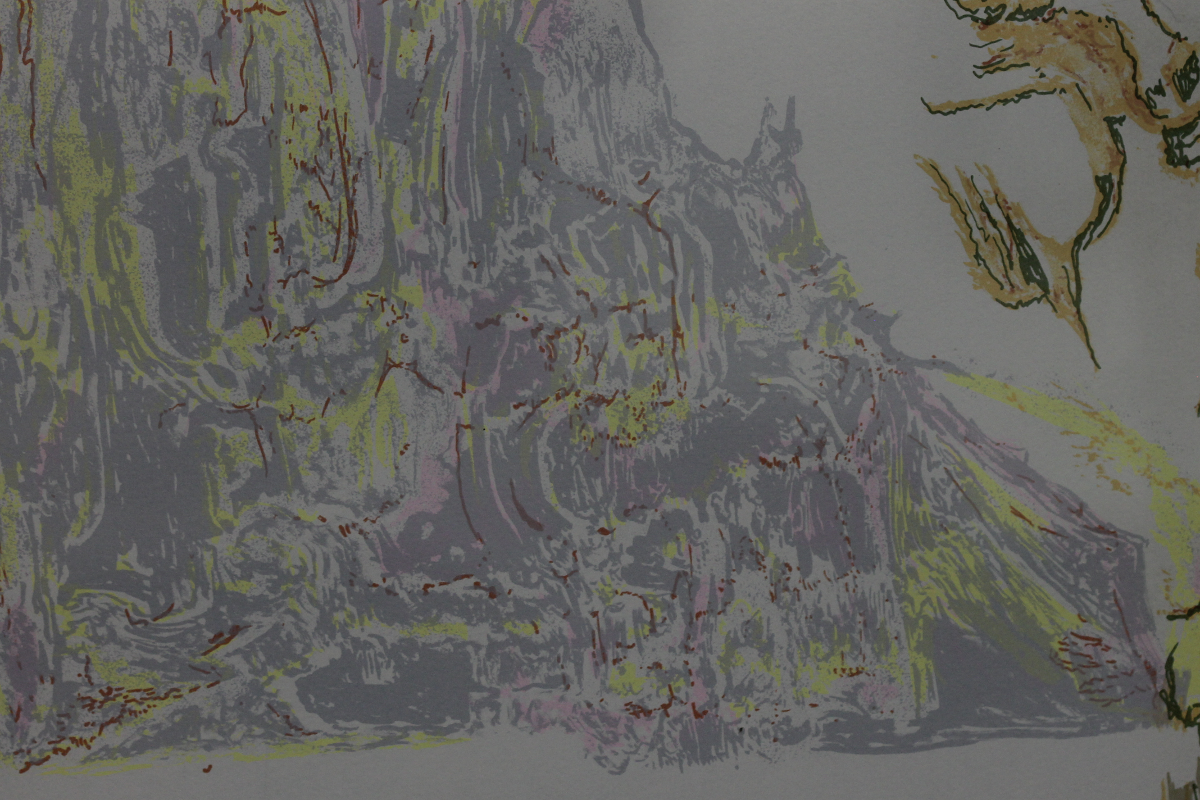 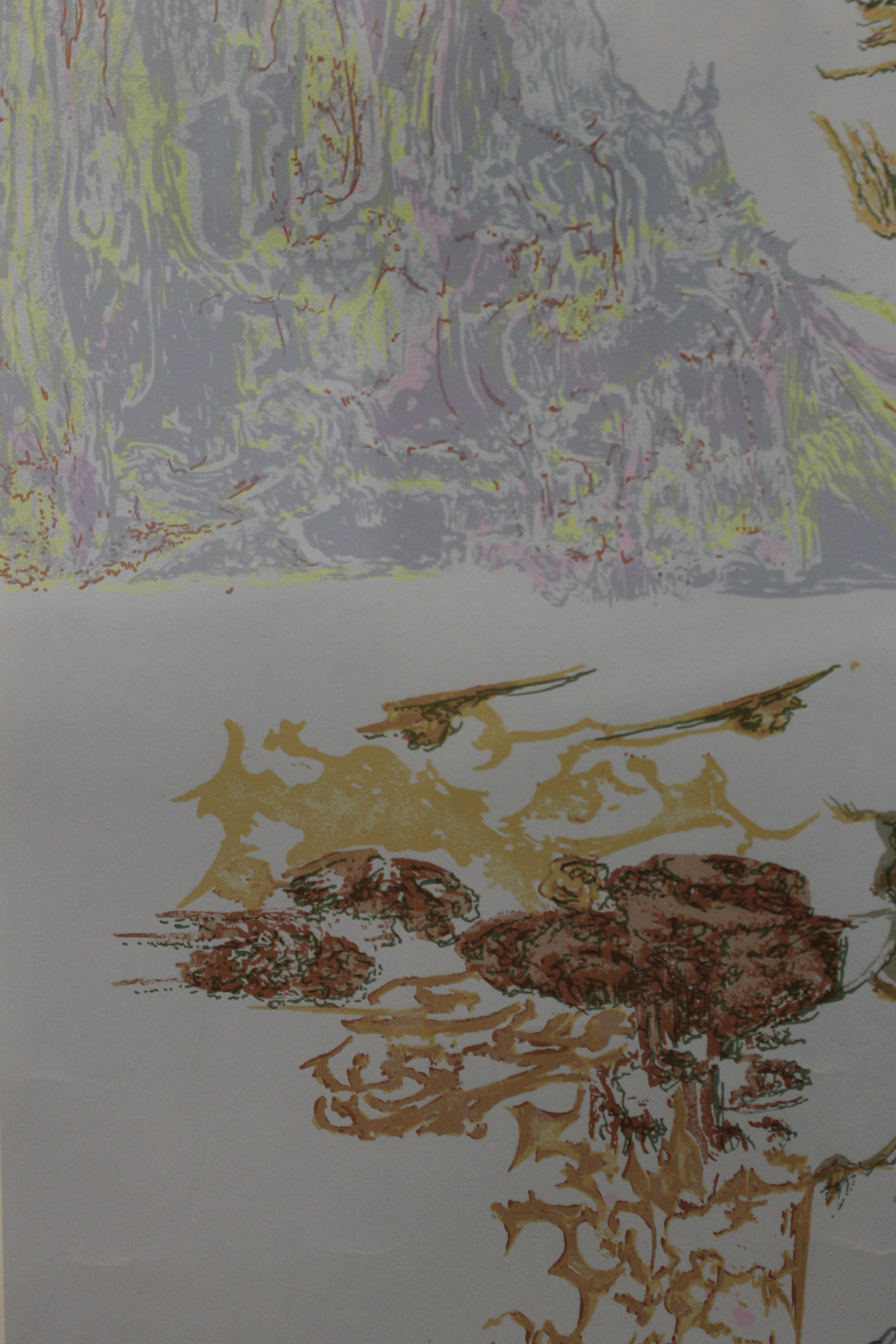 I suspect that there might be some fading of this print, although the colors are so perfect this might not be the case. It is interesting, though, to adjust the colors slightly in the GIMP and see what we get 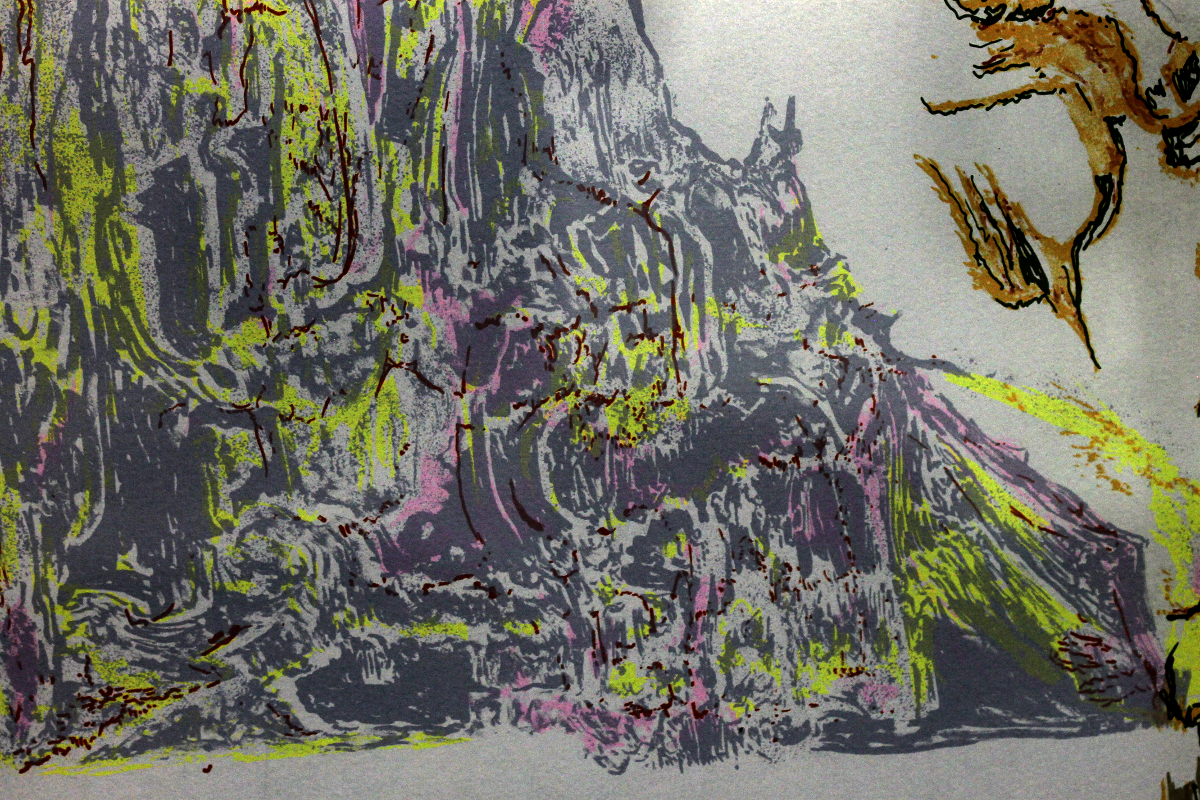 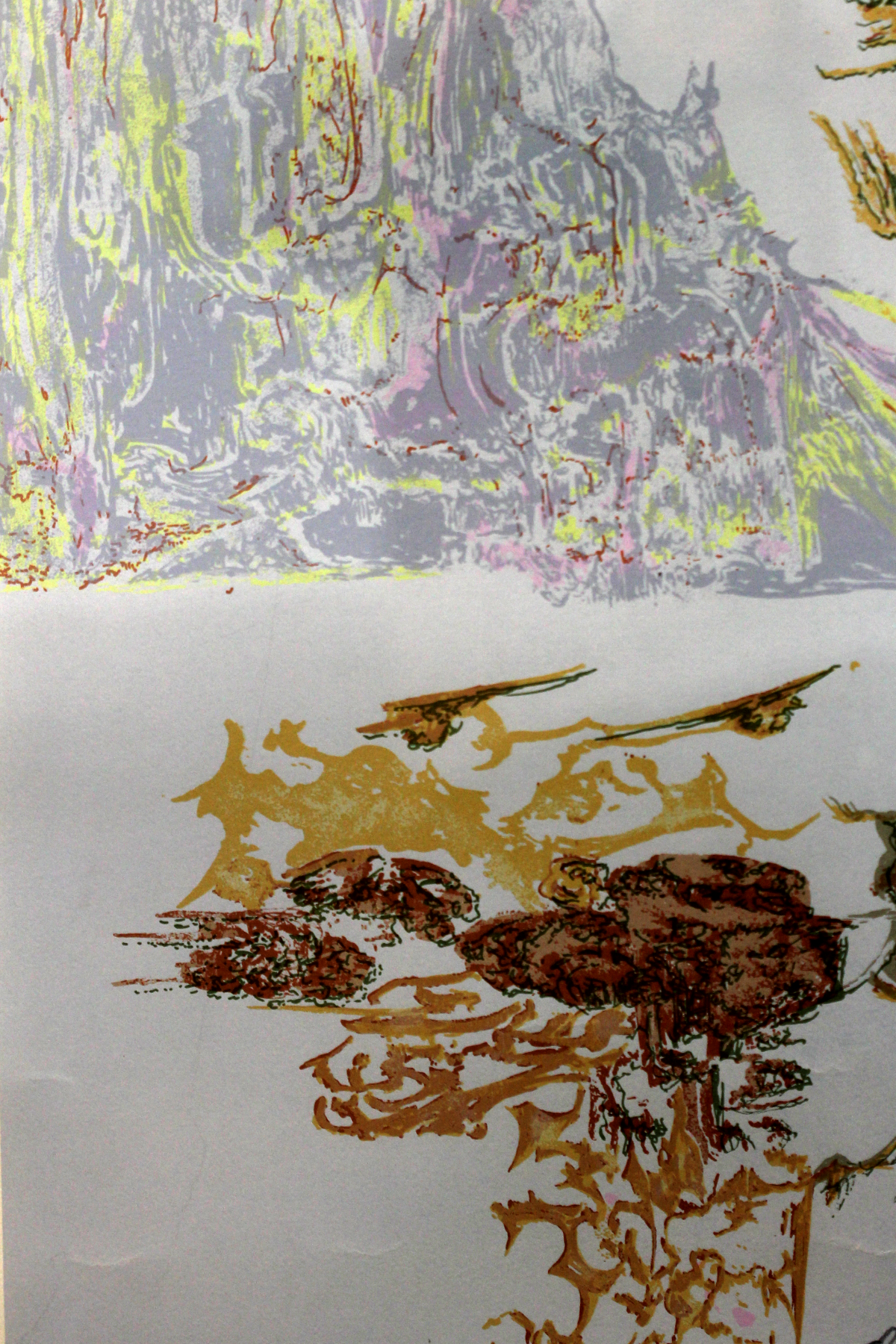 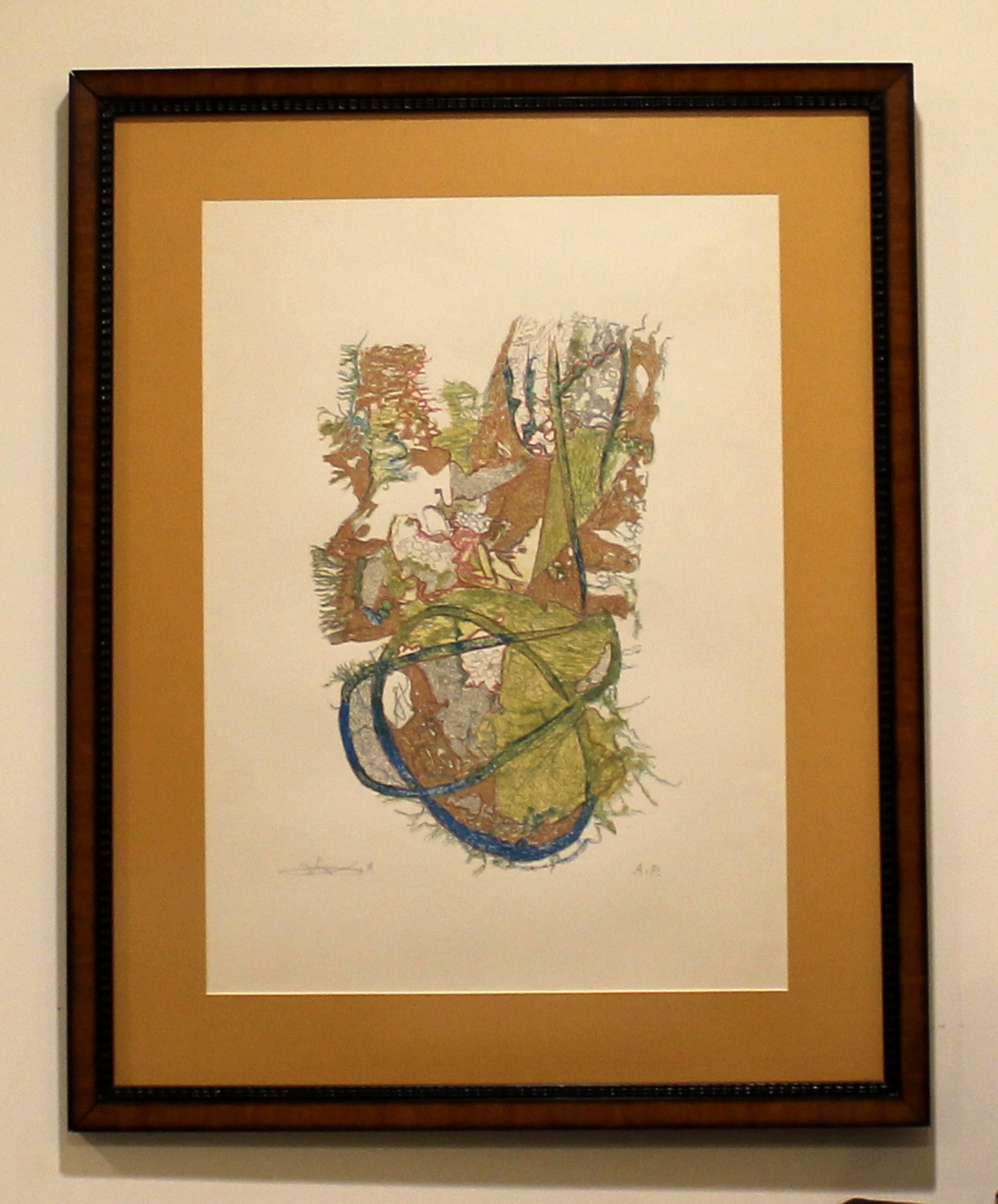 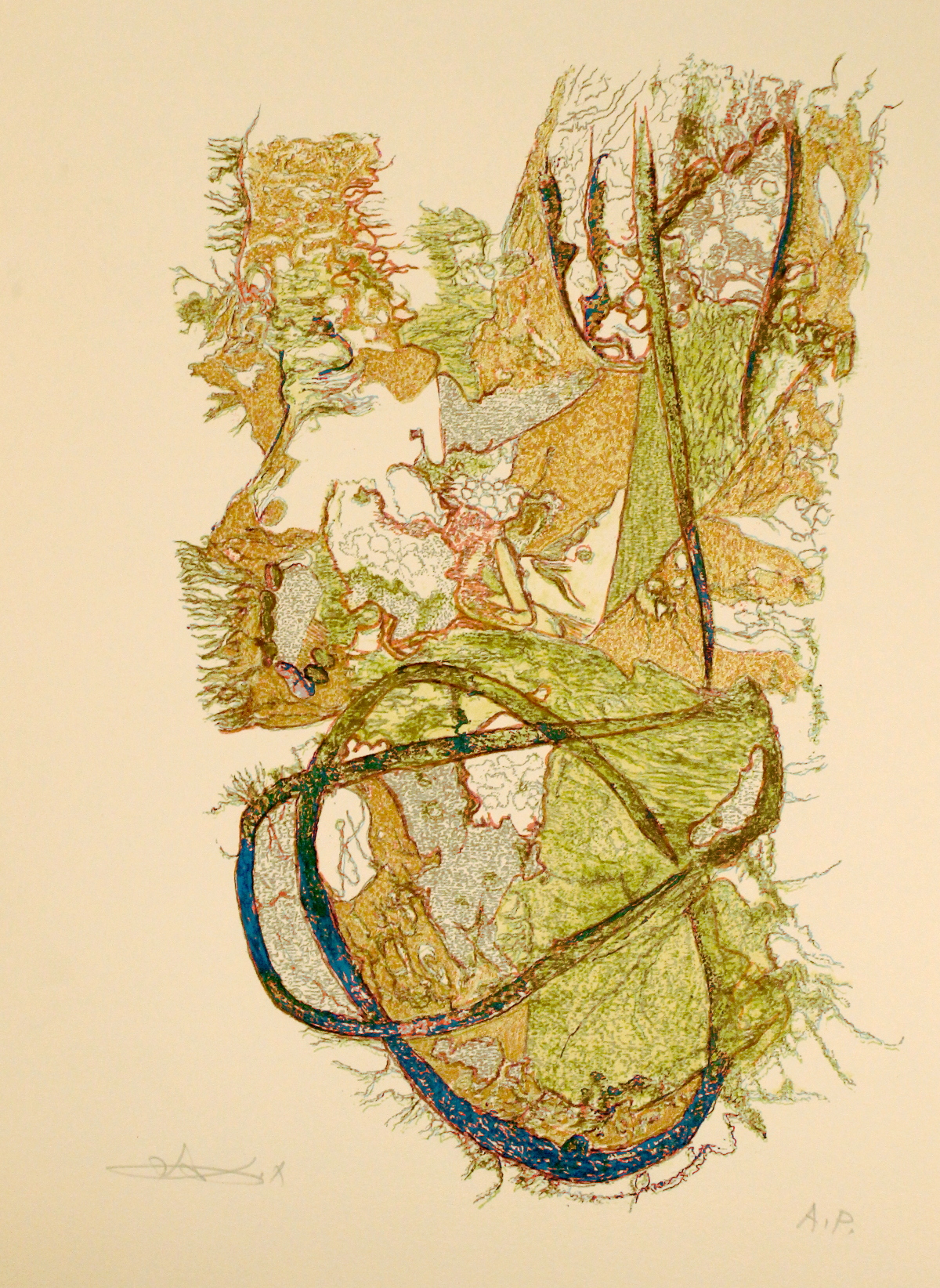 This brown and earth toned work, like Van Gogh's experimental abstractions of the forest understudy , breaks the familiar almost into total abstraction, where the sense of gravity is suspended and even the sense of direction, that is up and down, seems a bit confused. The impression is nearly like being underwater, hence the name given to this piece, like in the kelp forest off of California. The impression of a kelp forest is not likely to be on purpose, but the great thing about great art is that it defies even the meaning that its creator intended, and stretches out tentacles into the world, allowing the viewer to interact freely with the art.

The colors of this composition are fabulous and like many of the Nahor prints, are hard to get right with photography. The deep cobalt wraps itself into the rich greens and brown, with red highlight in such a way as to tie this composition into a whole body of work, even though these seem to be unlikely colors to be blended together. 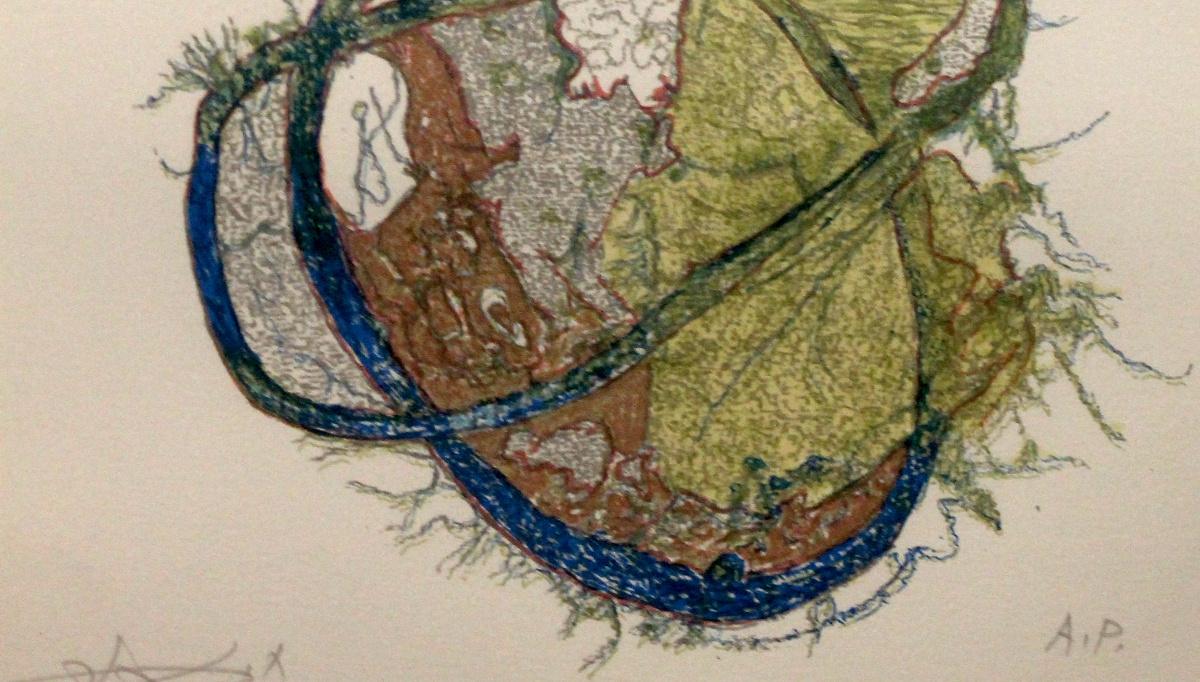 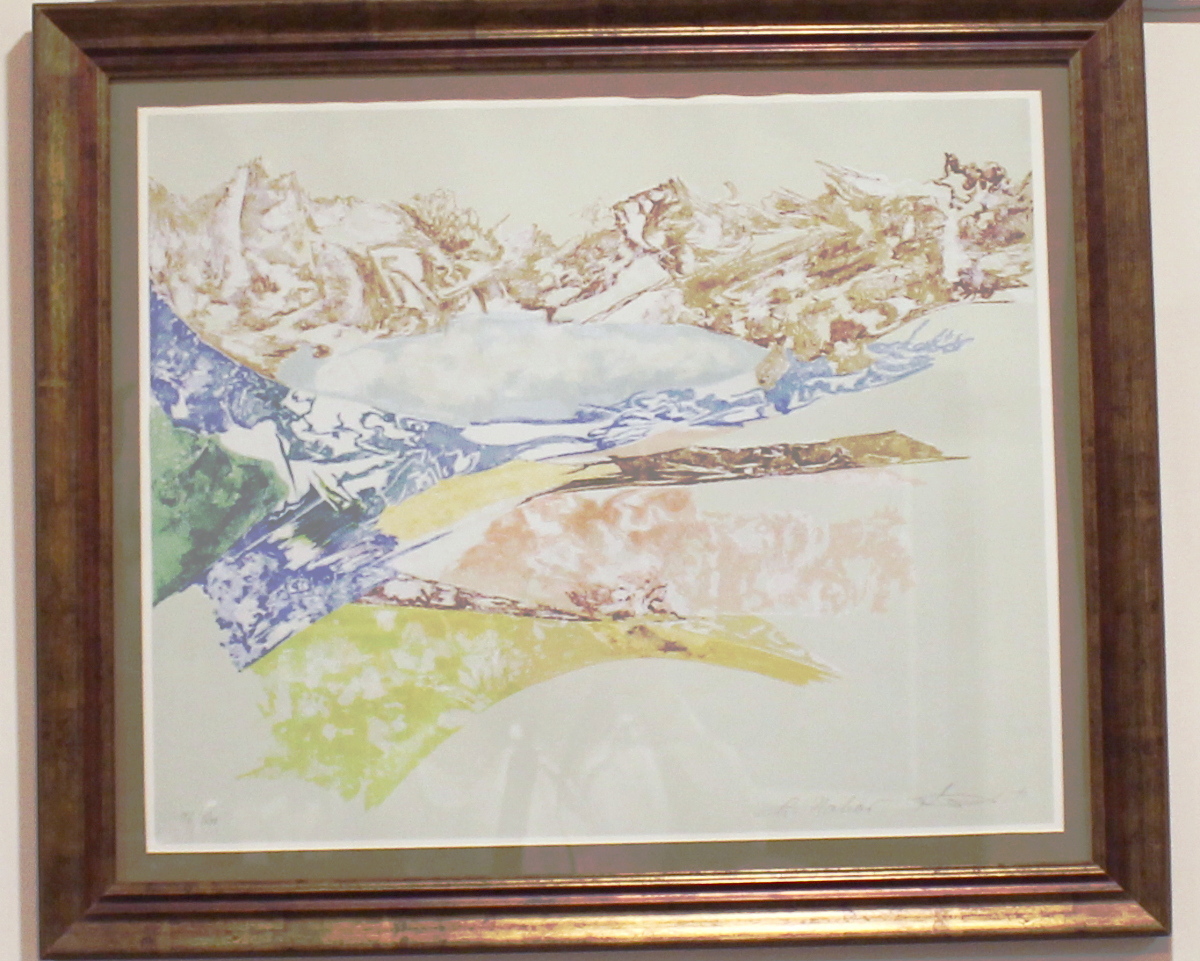 This wonderful landscape allows your mind to fill with the coolness of the distant water, and clear atmosphere in this engrossing composition that invokes thoughts of summers camp and endless fall afternoons. The simplified shapes and planar design draws you in from the distance, but still frames the entire image away from you. It gives you a feeling as if you are a tourist and traveler hiking to a far destination of unspoiled wilderness. The touch of white causes glimmer and reflection of the afternoon light. This implies a sophistication in technique in that Nahor is using the cream colored paper as a neutral background which he adds and subtracts from to create is dimensionality. 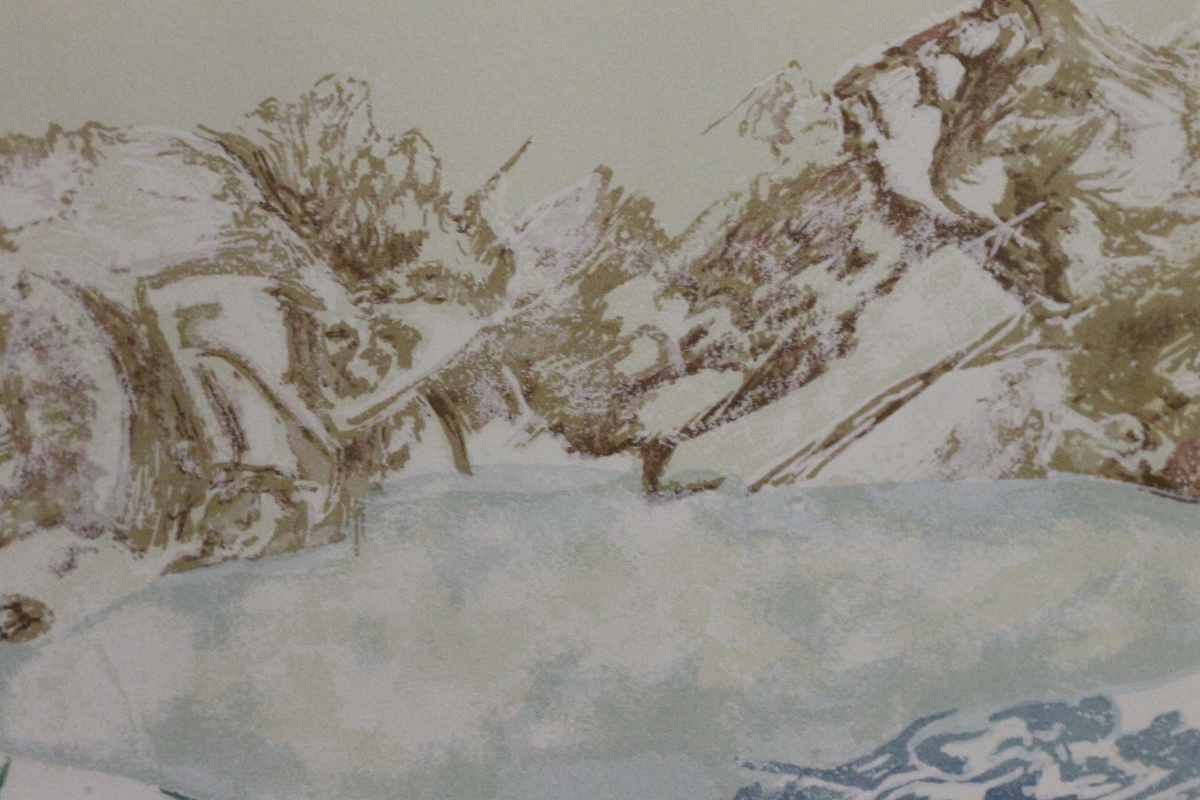 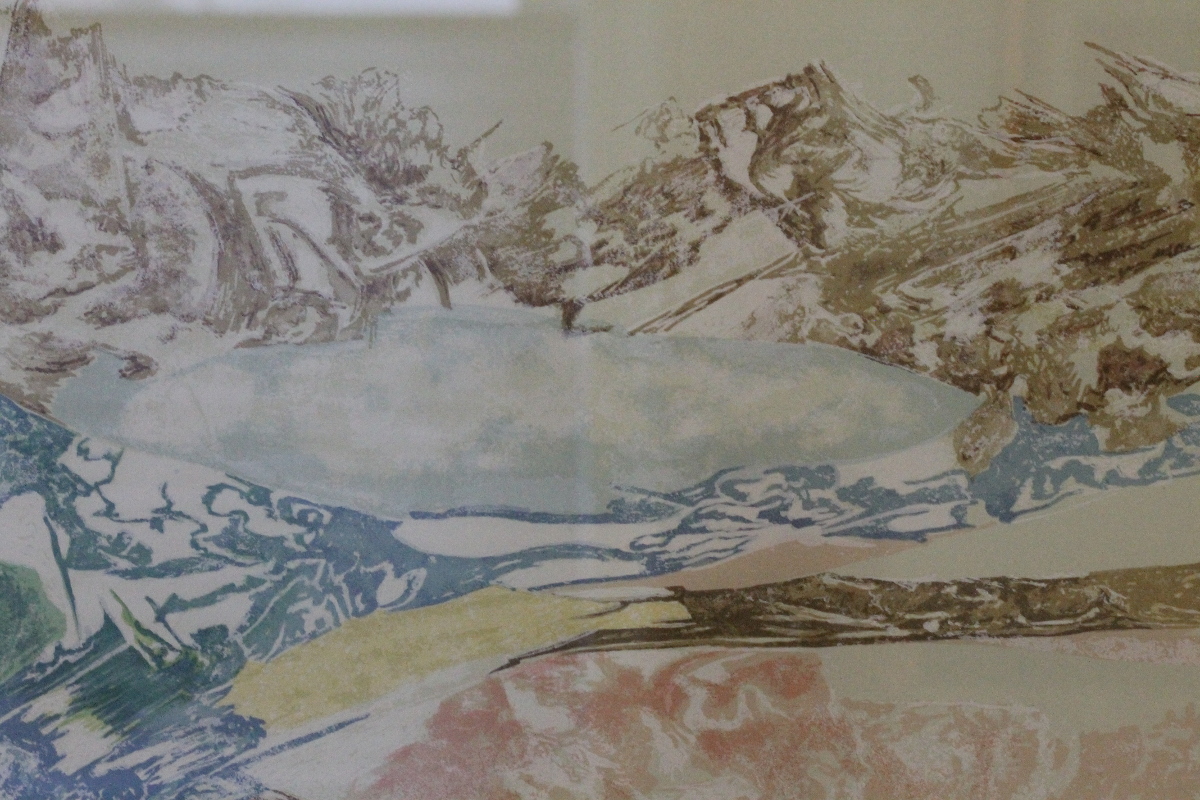 Much of his work can be found at the General Exhibition in Tzfat... if I haven't gotten there first.

He is also listed in the Israeli Museum database and they have done shows of his work, including a one man show in 1966.